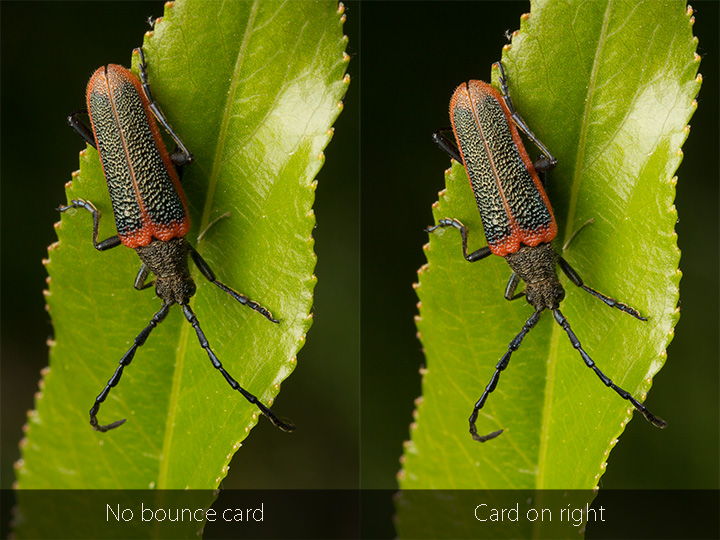 These images show the Elderberry Longhorn Beetle (Desmocerus aureipennis), and the subtle effect of using a bounce card to add fill to a side-lit subject. Of these two, I think the once without the card is nicer.

One of the cheapest lighting modifiers to use is a handheld white surface, often called a bounce card, to direct fill light toward a subject. When the light source is the sun, or a small speedlight, this is said to be effective for filling in unsightly shadows and flattening the exposure somewhat for a more pleasing appearance. It is a fine idea for people, but what about insects? Will bouncing back some of that diffused key light greatly improve the appearance of a photo? I did some experimentation to find out.

In the following series of frames showing a Silphid beetle (Sexton Beetle) of the genus Nicrophorus, the key light is a speedlight diffused with the Cheapskate Diffuser MK II, and the bounce card is placed directly beside the subject to the right.

In the frame on the right, the structure of the thorax is revealed in more detail by the bounced light from the reflector.

On the bare rock, the subject’s shadow is softened by the bounce card.

And here, with a bit of a key light error, the harsh shadow is undone by the bounce card, revealing detail on the head (but not enough to save the frame!).

In these next two frames, the diffused key light is also above and to the left, a second bare speedlight (in the Monster Macro Rig) lights the background, and the bounce is directly below the subject.

In this case, the effect is to flatten the exposure of the foreground, somewhat muting the effect of the angled key light. I prefer the frame on the left, even though the exposure is somewhat off.

OK, so with a bounce card in the bag, what else can we do?

Well, it can make a nice instant white background, changing this: 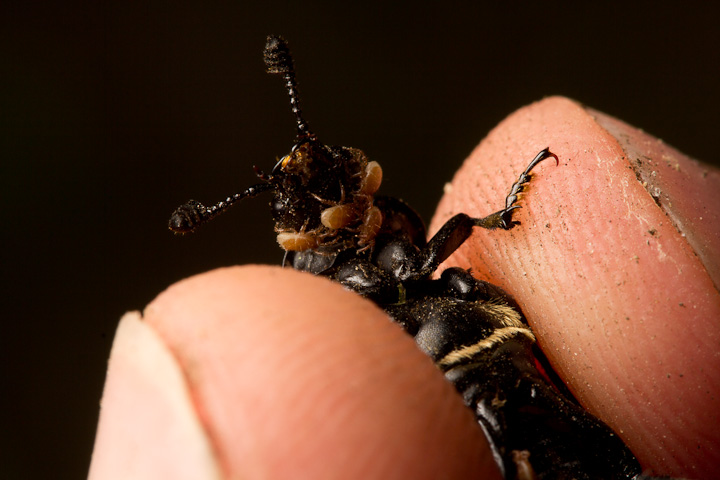 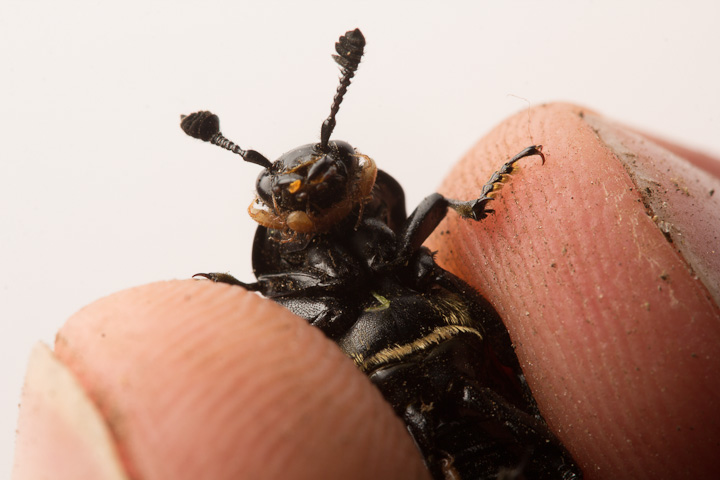 Check out all those mites!

All in all, the effect of the bounce card seems to be rather subtle in most cases, but may be useful for filling harsh shadows in a way that avoids the dreaded double highlights of using fill flash (especially in the eyes of the subject). Because it is cheap and light to carry, I think I will keep it in my photo bag, but will probably be judicious in its use. I think it is probably only suitable for things that don’t fly too readily!

I am sure I am just scratching the surface of using a card to bounce fill onto a subject, but I am itching to show you more of these beautiful beetles. 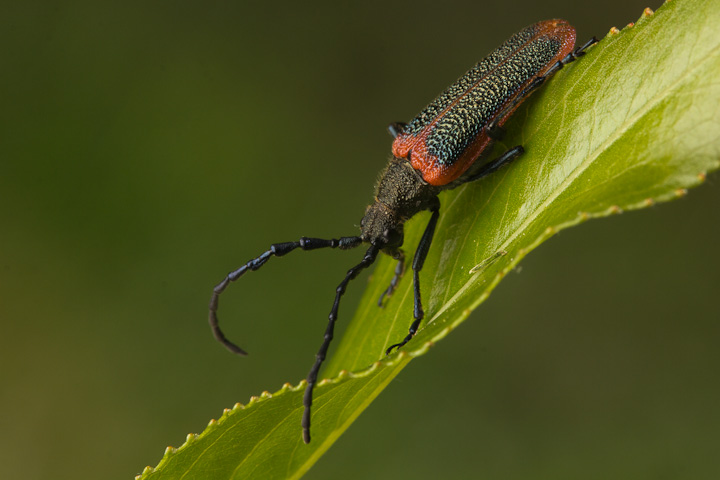 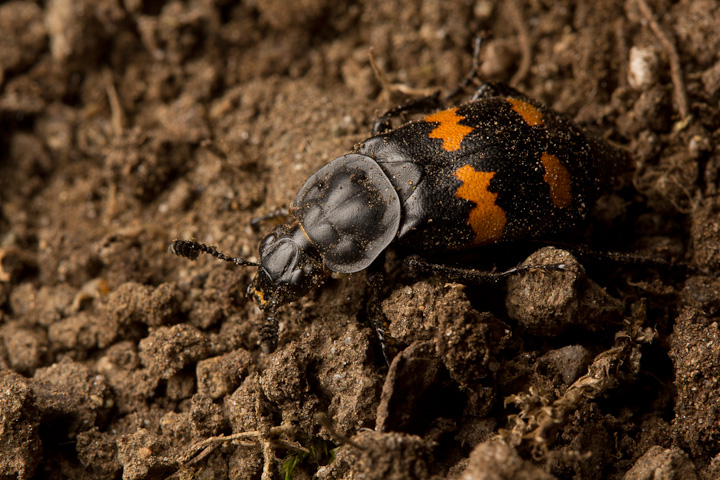 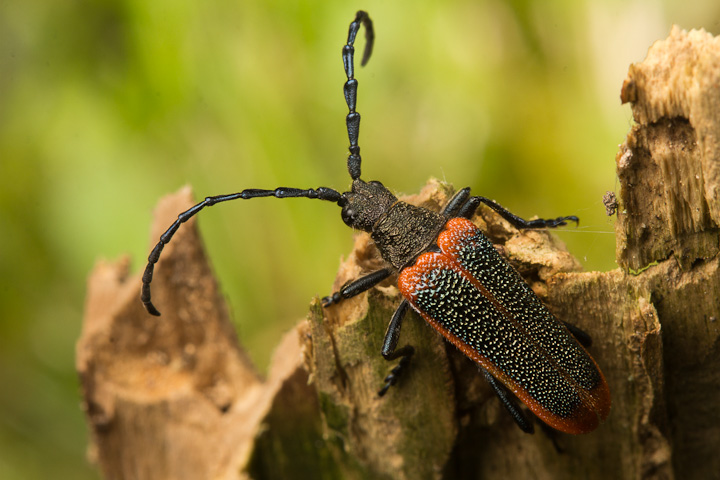 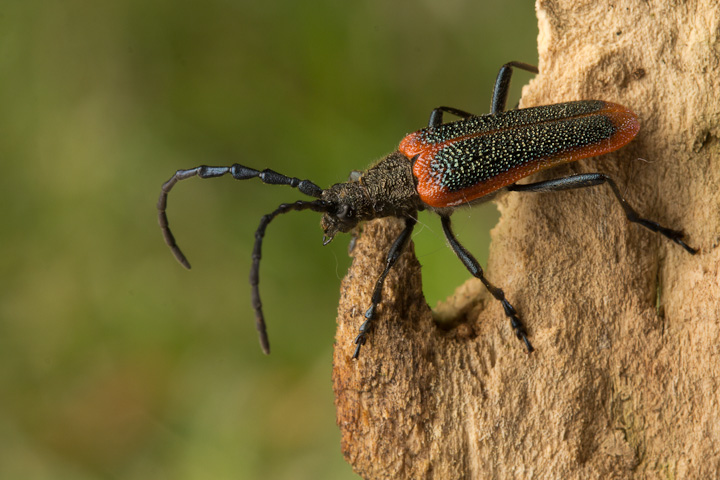 2 thoughts on “Cheapskate Tuesday 19: Speedlight(s) and a bounce card”