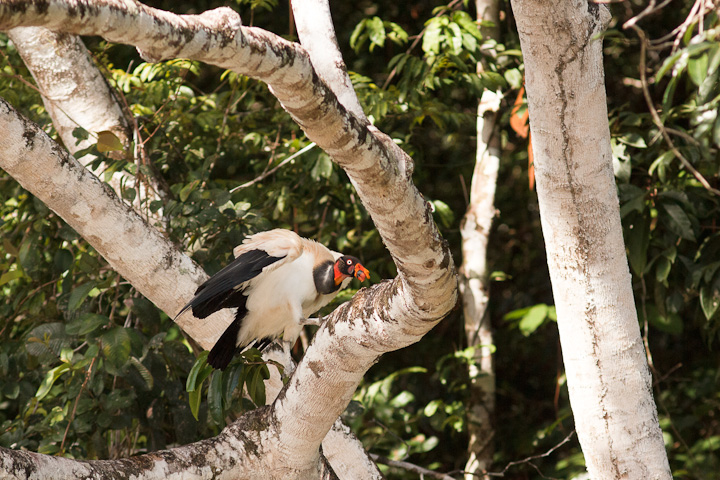 Once we had gone up the Rewa as far as we were able, we camped for several days at an old fishing camp. Although this was what most would describe as a “pristine wilderness” the evidence of previous habitation was all around. From Amerindian petroglyphs, mine leavings, tapped rubber trees, the evidence of a longer history continues to subtly mark the land. We had several abundant fishing sites for catching aimara close by, and Rambo and Brian set up a surprise for us during a fishing trip. They had hung a few aimara up in a shady nook, letting them slowly rot to attract vultures. The object of this was to bring down the king vulture, Sarcorhamphus papa.

These new World vultures are members of the family Cathartidae, which also includes the condors, the Black-headed Vulture and the familiar Turkey Vulture. The kings share their habitat both of black vultures, as well as Greater and Lesser Yellow-headed Vultures. The king is much larger than any but the condors, and is a dominant bird at carrion. It is often thought to be parasitic, having no sense of smell of its own and just using the other species to lead it to food, but this is not entirely clear. What is clear to all though is that at a carcass, the king is king! 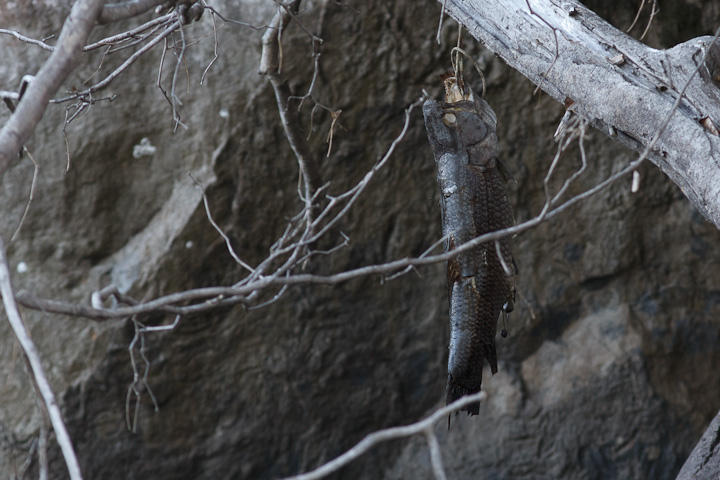 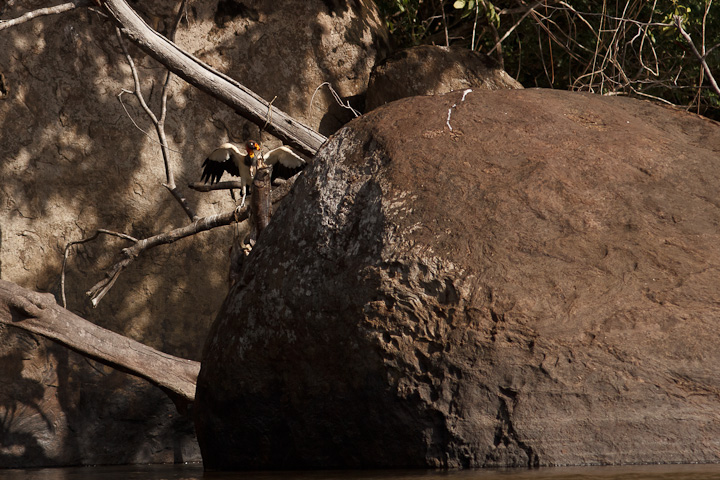 We paddled up silently, but still the king was wary. 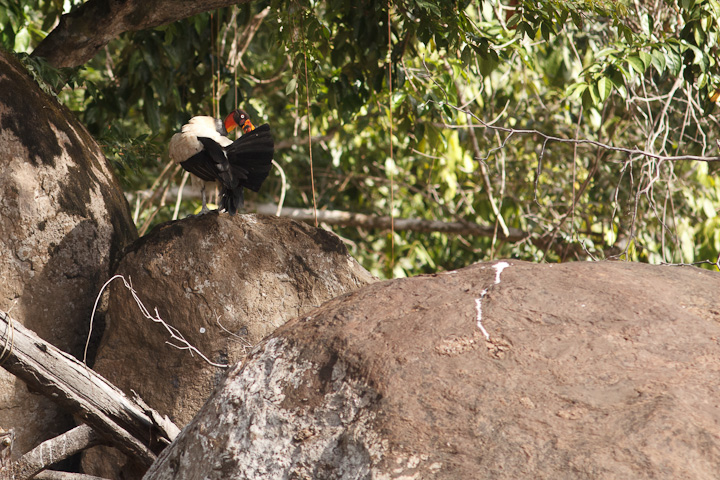 The king was not super frightened of us, but it had mostly finished its meal. 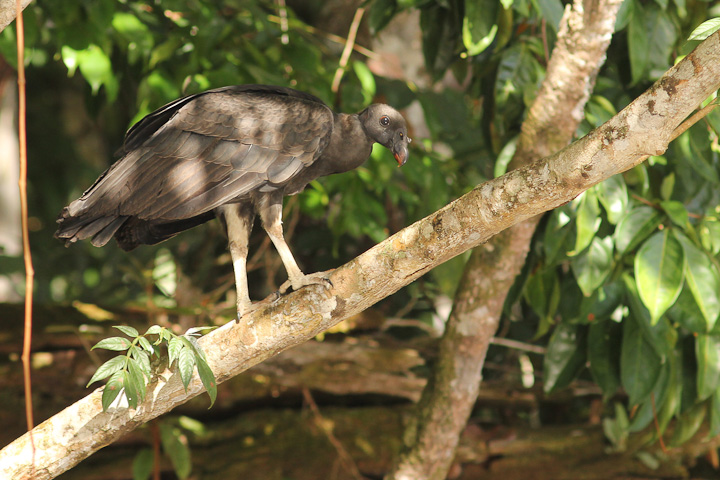 As we examined the trees above, there was a prince or a princess watching! 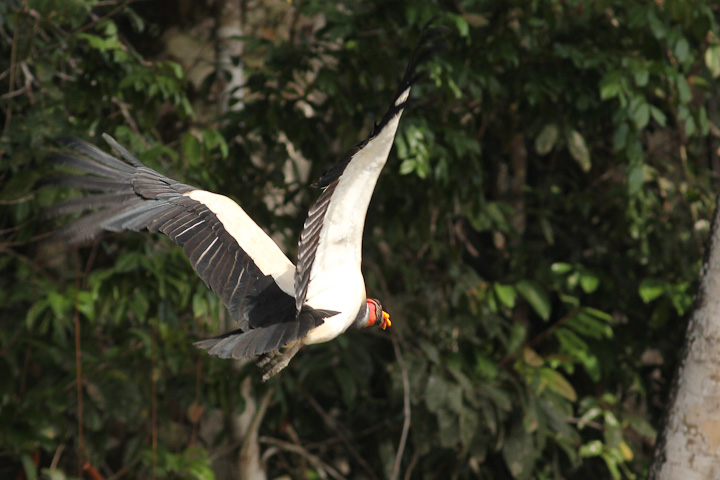 The king flew up to join the youngster. 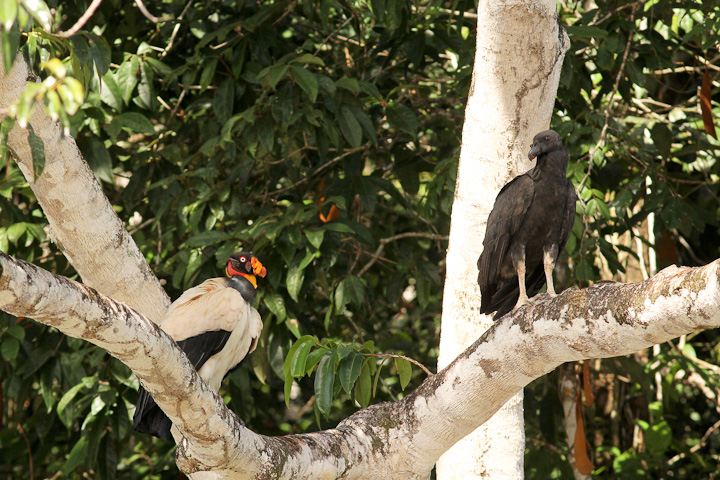 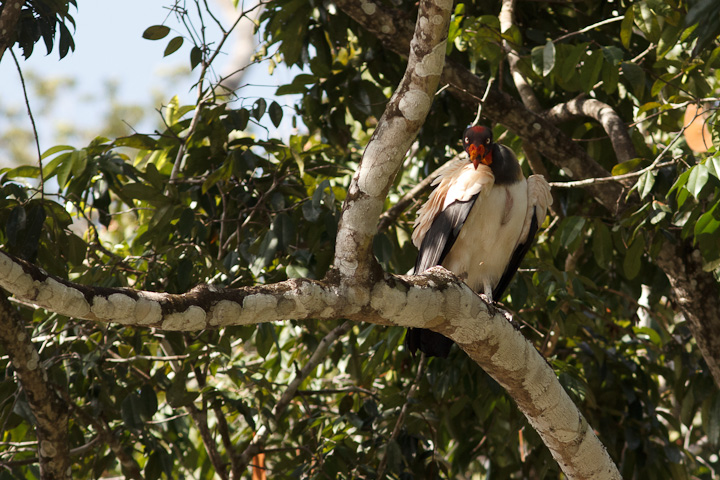 The coloration of the adult king vulture is spectacular, but they are sexually monomorphic. I think these animals are mutually sexually selected. 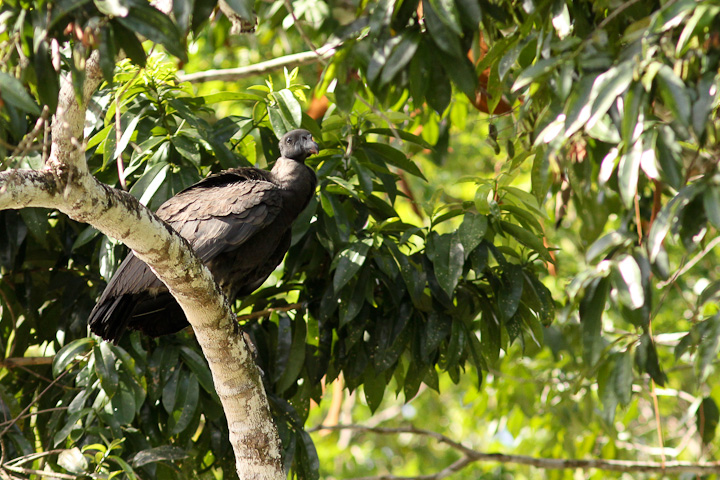 This baby king is really adorable. I had never considered that the plumage would be black. 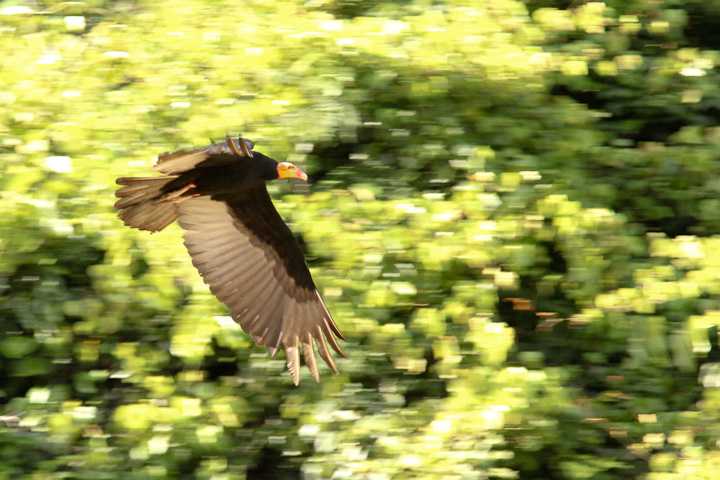 The kings were joined by some Greater Yellow-headed Vultures, which were also impressive birds. 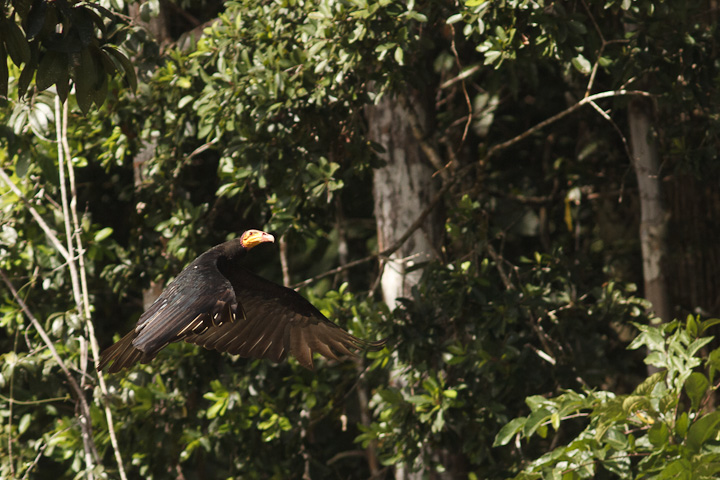 They perched in the same shady tree not far from the carcasses. 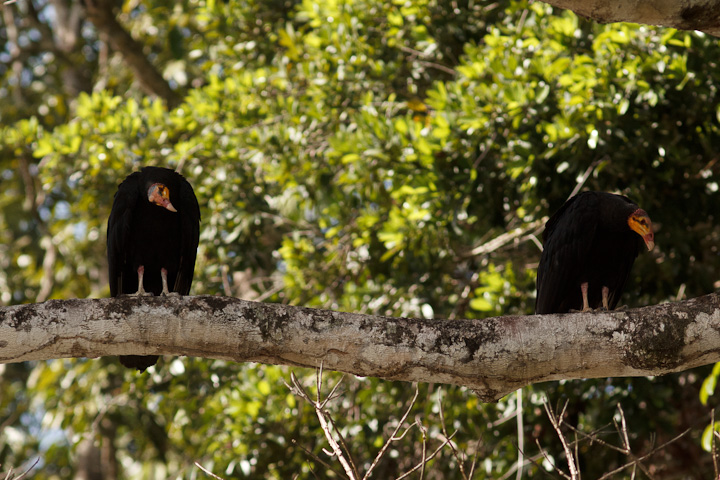 All of the vultures were somewhat put off by our presence, and were probably wondering when we would leave. 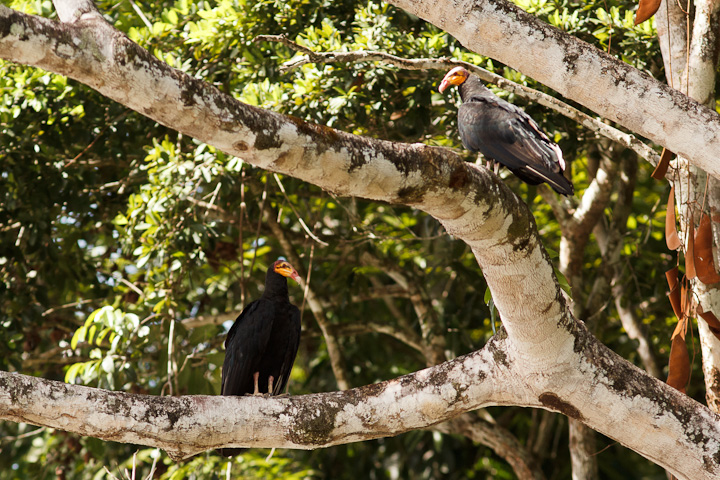 We stayed for some photos, and then made our way back to camp. 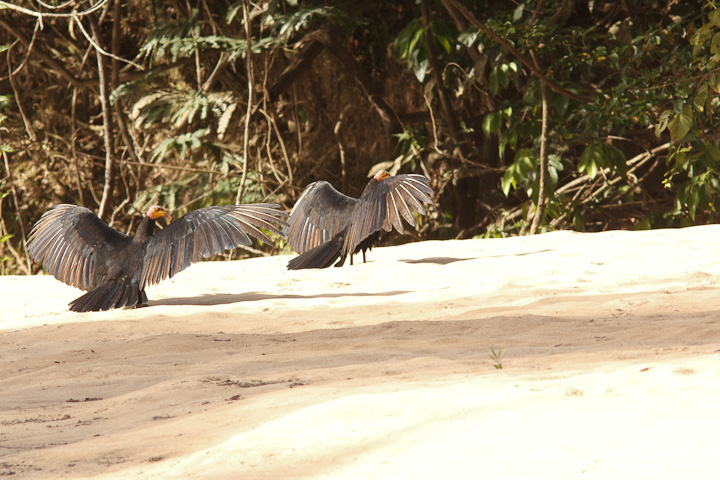 On a sandbank across the river, a couple more were taking baths and basking. 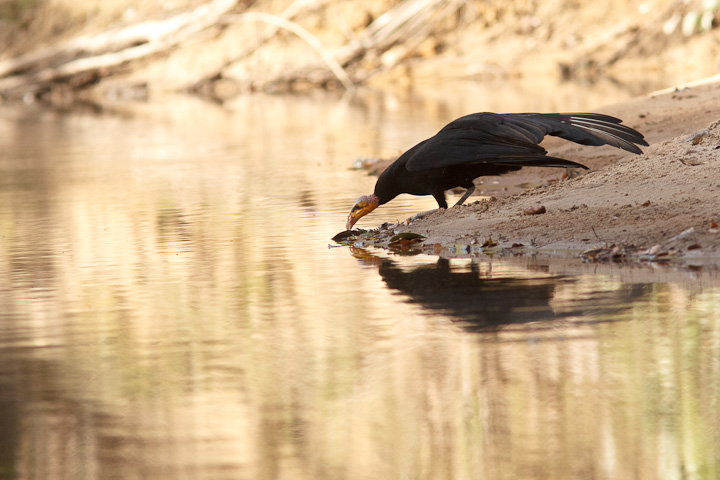 And in a couple of my favourite shots, this one took a drink. 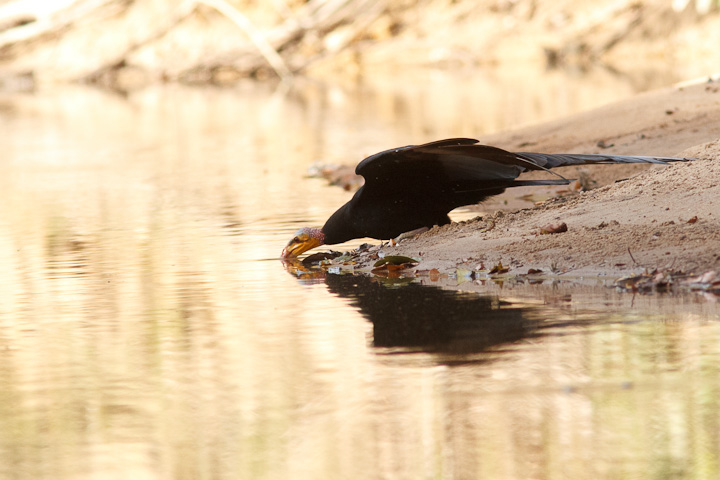 What caught my eye was that the bird sought out a shallow section to drink, much as we did to avoid becoming prey to an unseen caiman!

One thought on “Long live the king!”