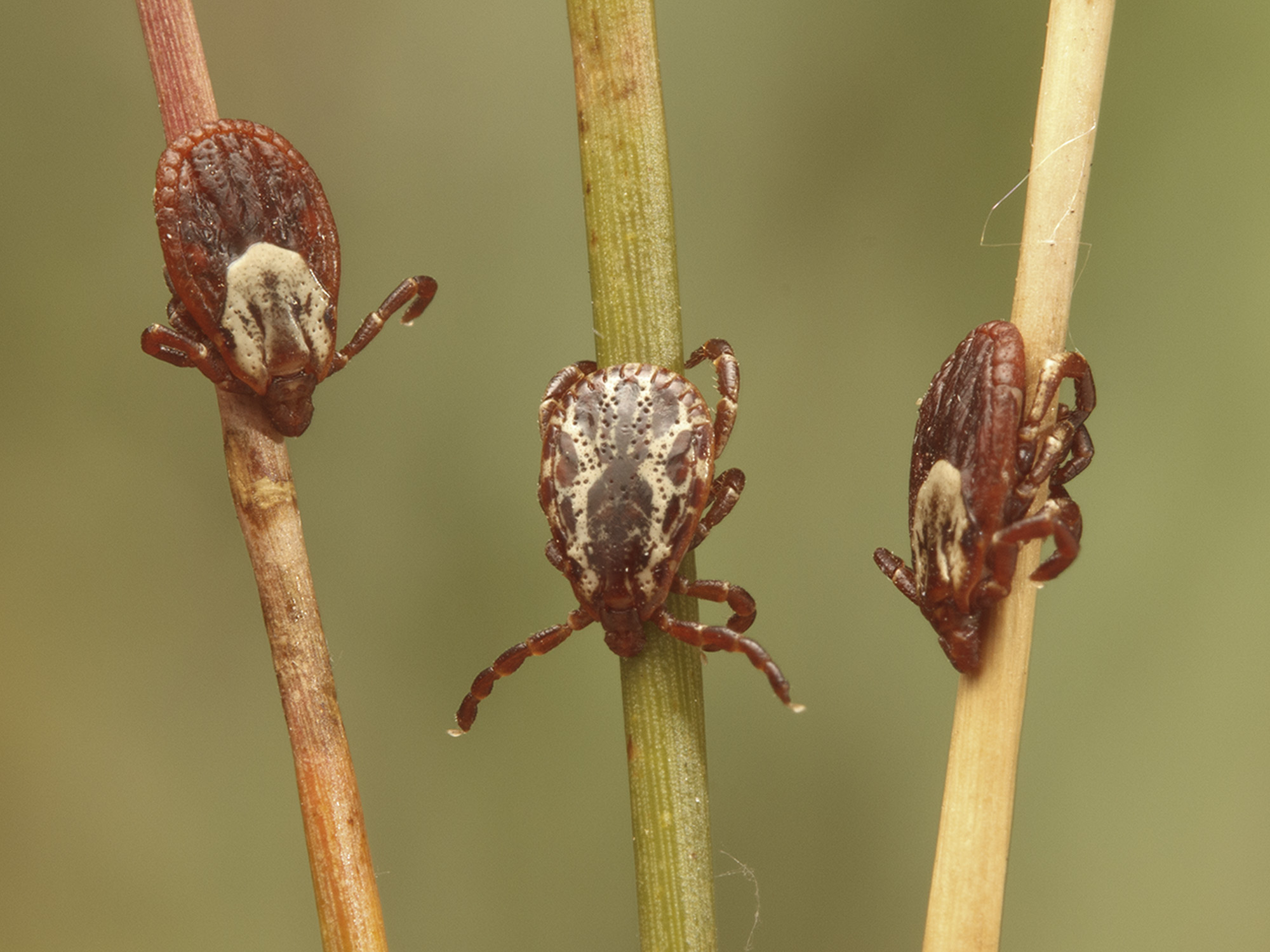 These aren’t the ticks you’re looking for…These are Dermacentor andersoni, the Rocky Mountain wood tick. They do not transmit Borellia, but nonetheless are a spectacularly ornamented hard tick. Male is in the centre, flanked by two females.

This weekend, Catherine and I went out to Victoria to spend Mothers Day with my mom, who years ago suffered a debilitating illness caused by a spirochaete, Borrelia burgdoferi.  This spirochaete, as far as we know, is transmitted in an enzootic cycle between ticks and various small mammals, reptiles and birds. When it spills over into the human population, it can cause symptoms ranging from mild rash and arthritis to fatal swelling of the brain and other organs, with just about everything in between represented. It is the most common arthropod-borne illness in North America, with hundreds of thousands of infections annually.

Primarily this disease is transmitted by black-legged ticks (Ixodes ricinus), but Ixodes pacificus, the Pacific black-legged tick is also a competent vector. While the main hotspots for Lyme transmission in Canada is southern Ontario and Quebec, there is growing evidence that locally acquired infections in BC may be becoming more common.

Nonetheless, the disease is often misdiagnosed, unrecognized, or otherwise not regarded as serious by a large proportion of the medical establishment, who are convinced that a quick round of antibiotics will kill the parasite. This is often true, but it seems that it is not always the case. Some of the most severe manifestations of Lyme disease go on to be persistent, leading to progressive debilitating symptoms. This chronic form of Lyme is the most controversial, as the leading treatment orthodoxy does not recognize the existence of long-term infection.

The existing diagnostic criteria are often insufficient, for while they pick up the so-called classic Lyme symptoms very well, an unknown percentage of sufferers never experience the characteristic bulleseye rash (erethema migrans) or early arthritic symptoms. Molecular techniques used for diagnosis are designed only for those sufferers presenting with classic Lyme symptoms, and even at this they have very poor performance. So the situation in Canada is there is transmission of a debilitating parasite, which can be difficult to diagnose and treat, and medical and disease-control officials are unwilling to acknowlege the extent and nature of the problem.

Anyway, something is being done to address this illness, both from a public information perspective as well as from a fundraising one. 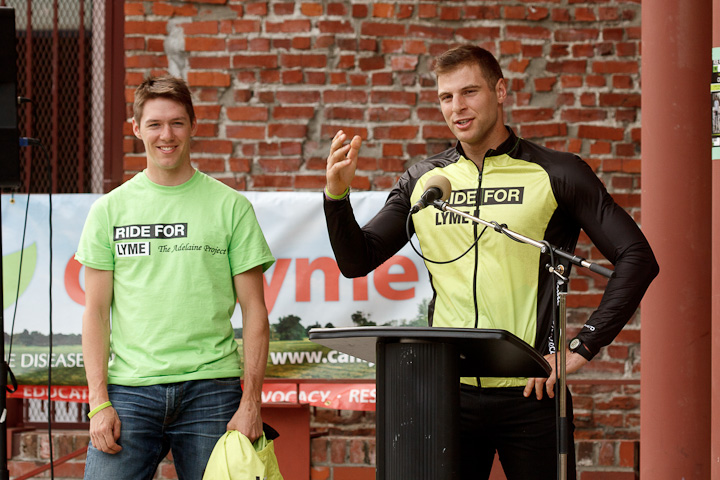 Two young fellows from St. Catharines, Ontario are undertaking a cross-Canada bicycle ride to raise money for and awareness of the disease. Daniel Corso and Tanner Cookson have a friend named Adelaine who was recently affected by Lyme disease, and realized what a tough and enduring problem the disease would be in her life. Discovering that the treatment options and diagnostic situation in Canada need to be updated, the two decided that their love of athletics may offer some kind of solution in the form of an endurance fundraiser. If nothing else, their ride might help raise Adelaine’s spirits.

On Sunday, they began their effort with a rally at Victoria’s Centennial Square, where they announced the ride and introduced their support team (their dads!). Since it was Mothers Day, they also made a special effort to acknowledge the mothers affected by the disease (like mine).

For more information on Lyme borelliosis in Canada, visit the CanLyme website, and to follow along with Tanner and Daniel’s ride, check out rideforlyme.ca.

This is a really important health issue in Canada, and this is a great way to raise awareness and funds for research. If you happen to be on their route, be sure to go and cheer them on!

Below are some pictures from the Victoria events.


One thought on “Ride for Lyme!”