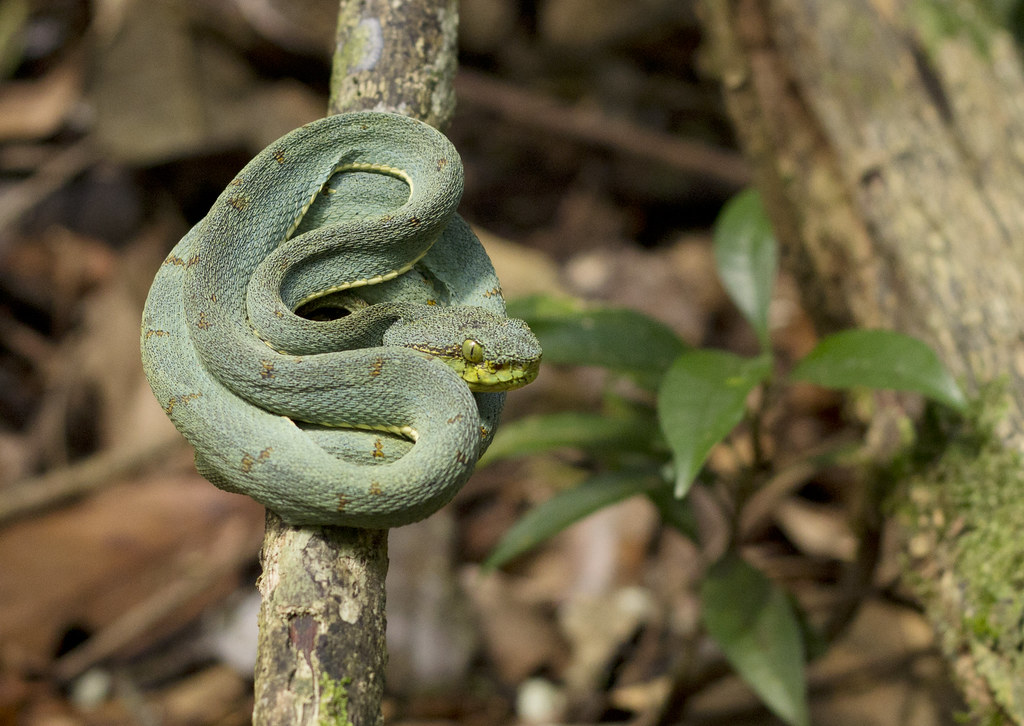 The first and only time I saw this beautiful arboreal pitviper was on the last day of last year’s field season. This shot required running down to the Grand Plateau an hour before the chopper arrived. This is Bothriopsis bilneata (formerly Bothrops bilineatus)

Over the past few years, during my fieldwork in French Guiana, I have been on the lookout for snakes. As a child, I always loved these animals, having kept several as pets. In fact, like many entomologists, I first wanted to be a herpetologist!
In the field, there are snakes to see, but for better or for worse, I usually only see 2-3 per month of fieldwork. This past field season, perhaps because we were covering 7-16 km per day most every day, we did encounter more than that. Please enjoy this selection of French Guianan serpents that we saw this field season:

My first anaconda! This was actually spotted by an ONCFS director (Jean-Marie), somehow…It is just a small one. Eunectes murinus

See? Just a small one! Thanks Jean Pierre!

A small nonvenomous colubrid, said to be a mimic of the venomous Bothriopsis bilineata at the top of this post. This is Xenodon werneri

Pseustes poecilonotus…Kinda like a rat snake, I suppose, but maybe a bit more active. This shot was exposed at a couple seconds, steadied with a tripod. 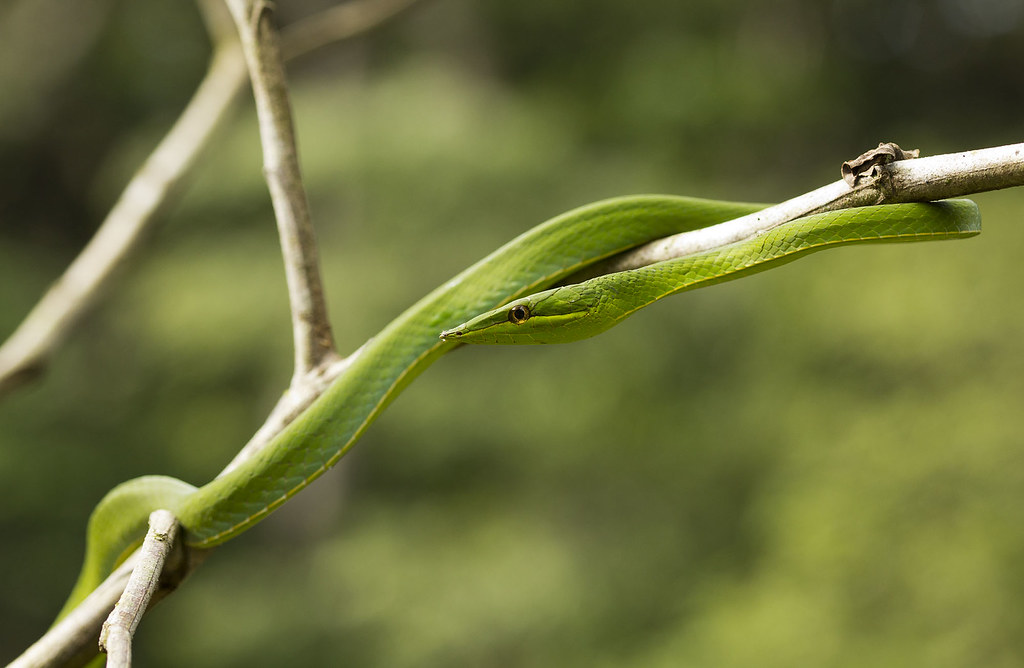 You know you wanted to keep gazing into these eyes…

Here is a Bothrops atrox. This one I almost stepped on. My boot was within 1 m of this animal, but it did not bite. Catherine spotted it after my careless blunder!

The rain started pouring shortly after the first shot, so with our transect scrubbed, I put the camera in a bag on the tripod and kept shooting.

Note on Snakes and the danger posed by them:
Some of the most common questions I get about work in the tropics is “what about snakes? Are there lots of them? Are you afraid?”
Well, yes, of course there are snakes, and yes, there are a lot of them, but no, for the most part, I am not terribly afraid…
Lets be clear, it is a very remote area to work in, and it takes at least 40 minutes for a helicopter to fly out and get you, assuming one is available and it is not crappy weather or nighttime. A snakebite could very well be a very very bad thing indeed.
That being said, with a few sensible precautions, snakebite is very unlikely (or that is what I like to tell myself anyhow). First of all, do not handle the snakes, especially the dangerous ones or the ones you do not recognize to be harmless. This should be obvious. There is probably no good reason to be handling them anyhow, unless they are what you are studying.
Secondly, do try to watch where you are going, and watch where your feet fall. Even with some of the most cryptic species, you can often see them before you step on them (I think you can anyway…I have seen a few anyhow. If I did step on some I did not suffer for it…)
Thirdly, I like to think that the wearing of high boots may ward off some bites, at least of smaller specimens. I generally wear high rubber boots in the forest, as they are cheap, durable and waterproof. They are also pretty tough, and while they probably would not stop all fangs from entering the skin, they might at least make some of the small ones glance off. I always try to look where I am going, and I always use a headlamp or flashlight at night.

Chances are, you won’t get bit… BUT!

it could happen, and it would probably suck, so a little healthy fear is probably a good thing….

You really do not see these beauties too often, as they are nocturnal. They are one of the best reasons to always use a lamp!

For more snakey goodness from the internet today, click here