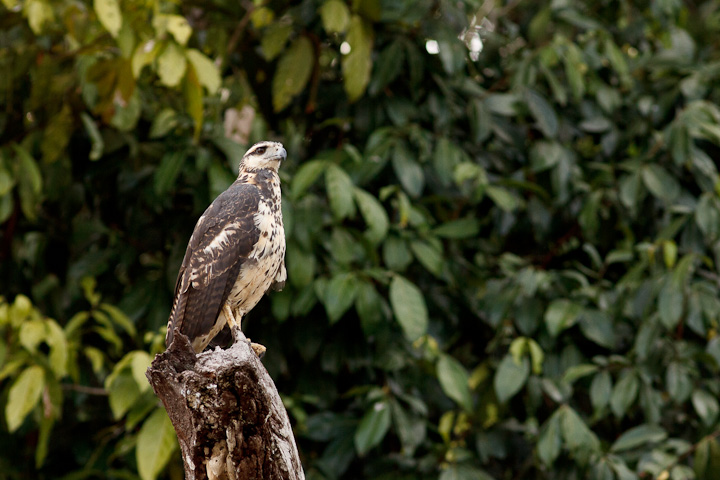 A juvenile Great Black Hawk, Buteogallus urubutinga. These large buteos are probably the most visible raptor along the rivers, although they are often quiet. In French Guiana, they are called “Buse Urubu”, or “vulture hawk”.

Travelling by boat offers many advantages over walking, not only in saved energy and efficiency, but also in that approaching wildlife is often much easier. I have covered many of the fish-eaters we saw along the riverside before, but here are some other species that we saw quite often along the Rewa. 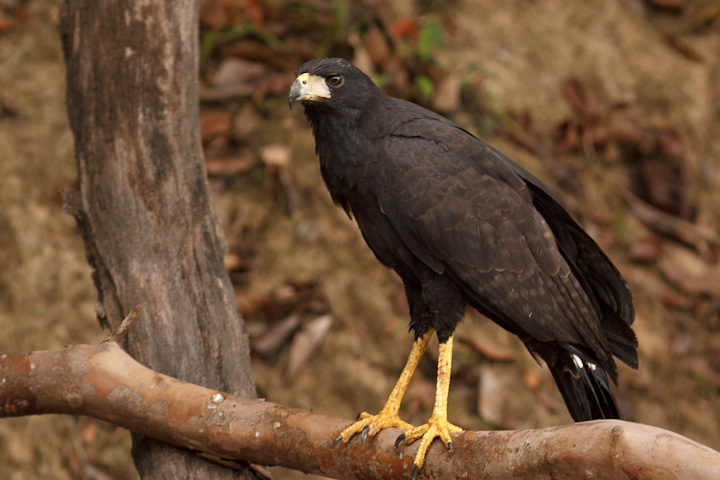 Here the Great Black Hawk appears in adult garb. The long bare legs are well-suited to their habit of foarging on the muddy shoreline. They prey on frogs, lizards and snakes, as well as fish occasionally. I actually did a camera trap study a few years back at a great Black Hawk nest, but the data are pretty sparse due to death of the nestling after a few days. 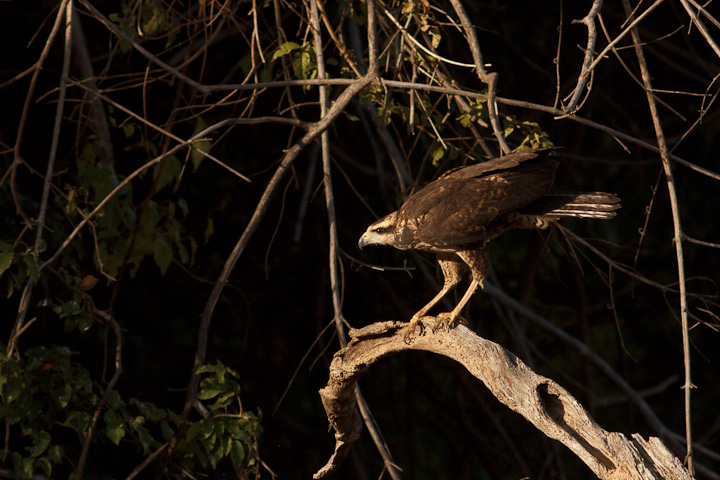 Another Great Black Hawk juvenile looks ready for action, but probably isn’t. Mostly they sit and call for food from their parents! 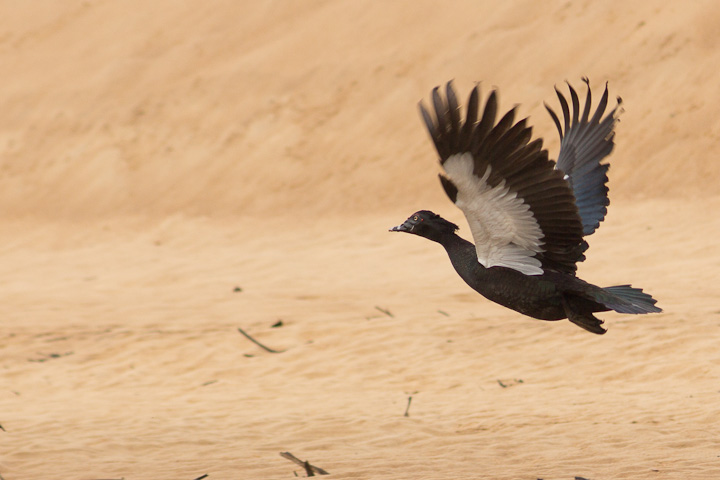 A Muscovy Duck in flight. These treehole-nesting ducks are the progenitors of the domestic strain, and are large and impressive birds. They seemed to travel long distances along the river, and spend the night on quiet ponds and branches of the river. None allowed close approach. 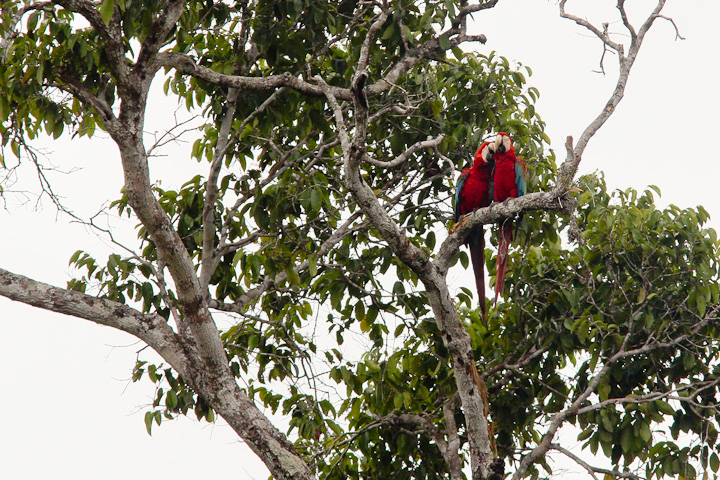 Red and Green Macaws (Ara chloroptera) nuzzling on a tree. These macaws, along with two other species, were loud and obvious along the river. They also travel large distances, and sometimes engage in playful mock combat on high branches. 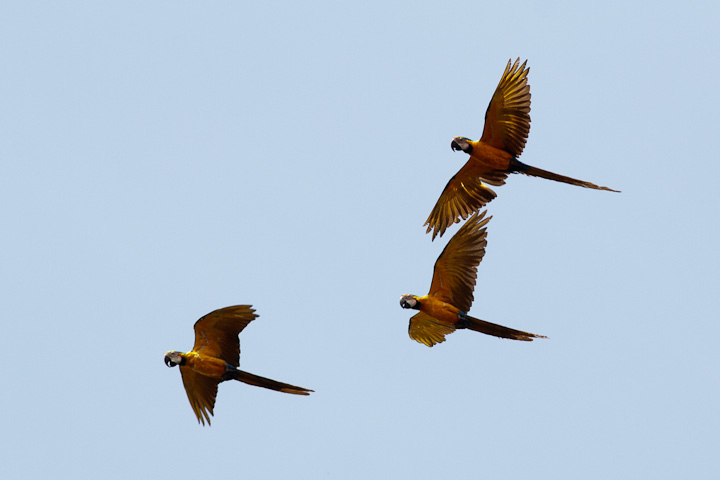 The Blue and Yellow Macaw (Ara ararauna) was also quite abundant. They are a bit larger and deeper-voiced, but sometimes seem social with the other species. 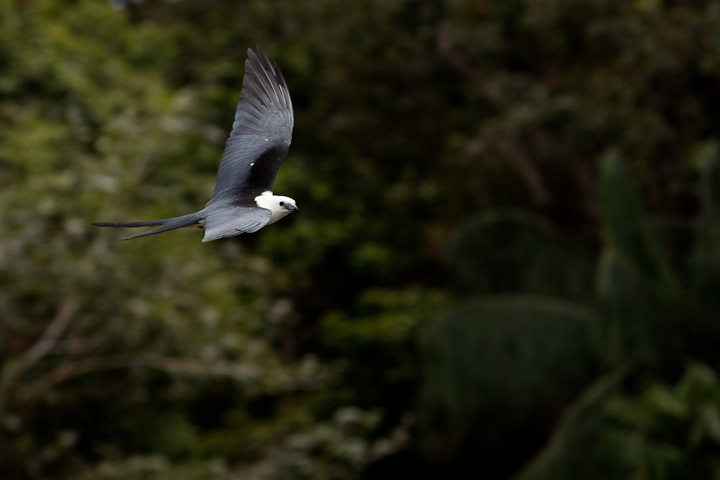 The Swallow-tailed Kite is an amazingly beautiful raptor, which also occurs in Florida. Guyana has both migrants and resident birds. 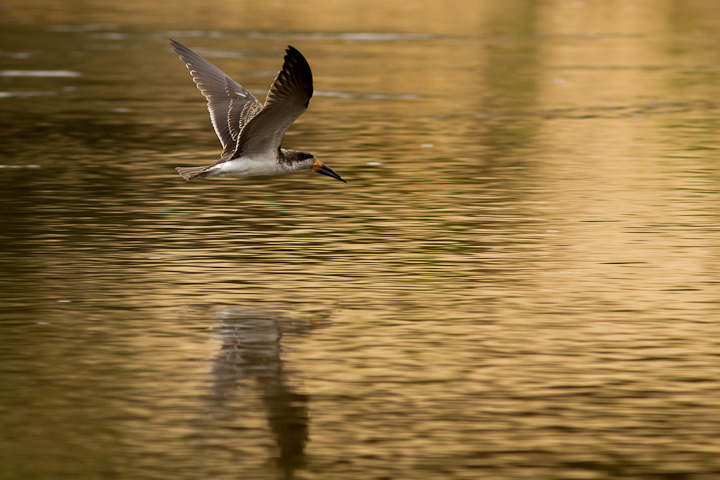 Black Skimmers, also quite cosmopolitan, breed along the river. We often saw them in company with Large-billed Terns. 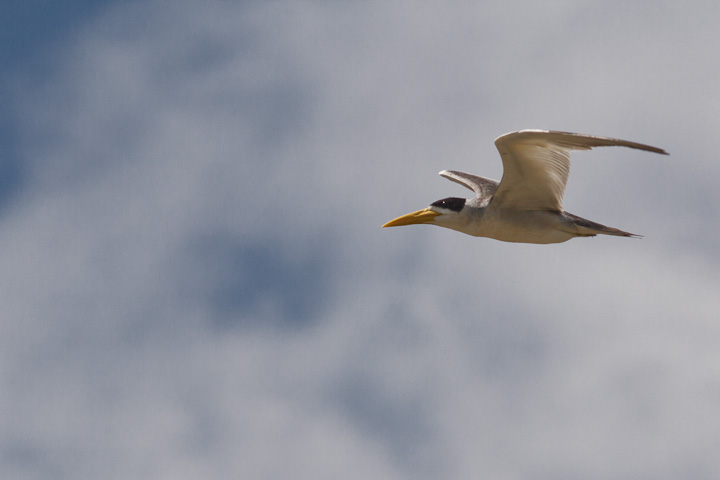 The Large-billed Tern (Phaetusa simplex) could be found nesting on sandbars. Sometimes they would dive-bomb our boat. 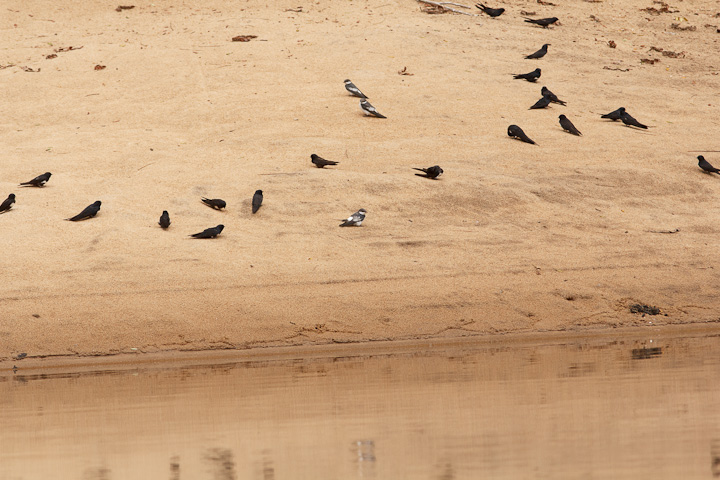 Three species of swallow were super abundant. We saw White-winged Swallows and White-banded Swallows most commonly, but also Barn Swallows high up on the Rewa. 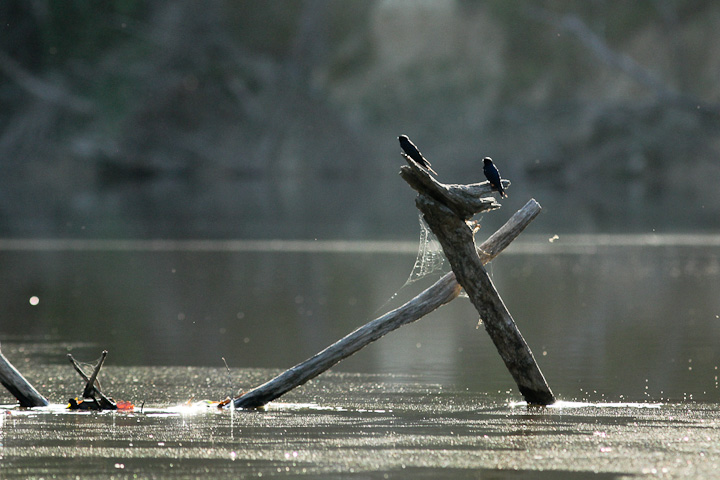 Dead wood in the river was the favorite perch of most of the swallows. In the evenings, swallows would be replaced by bats and swifts, and sometimes all three taxa would fly together. . 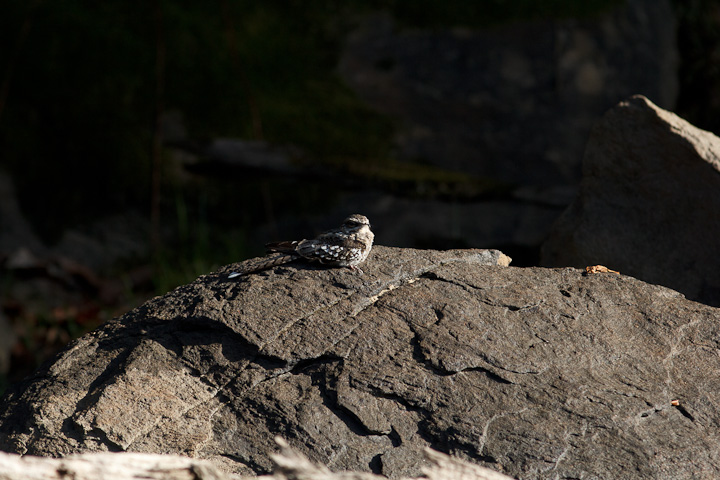 We also saw a lot of nightjars perched on the river, in their usual cryptic fashion. 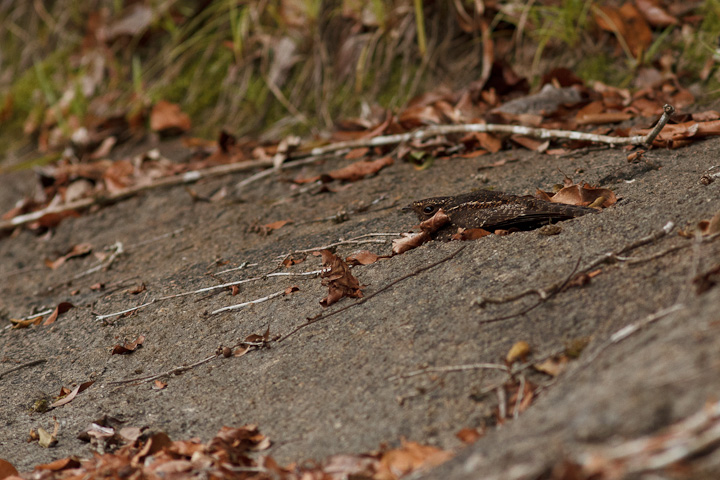 Here is a Blackish Nightjar, recently disturbed from her nest. 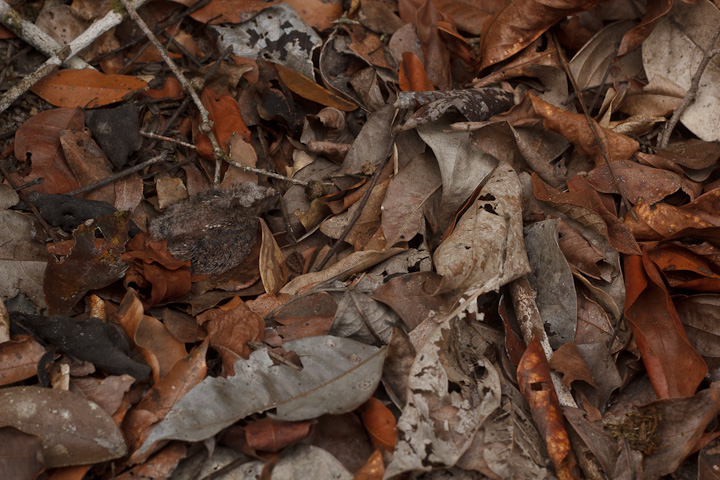 And here is her offspring! Can you see it? 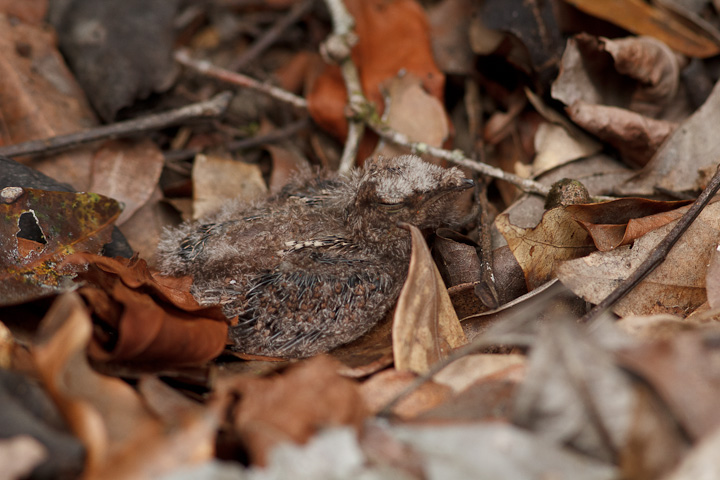 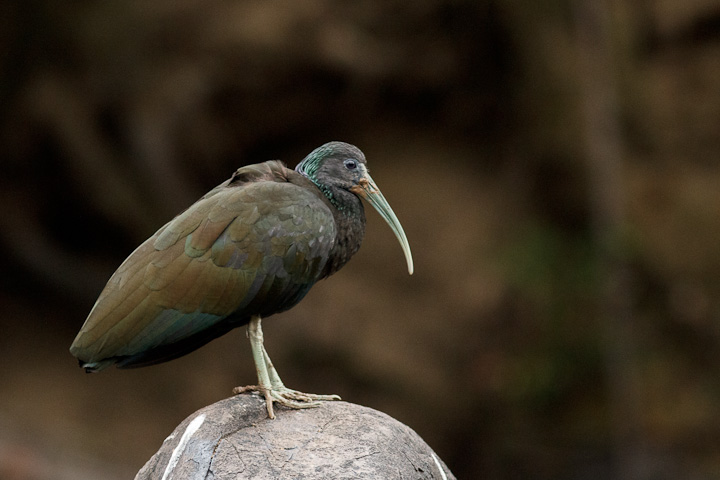 A Green Ibis. These ibises were always a bit disturbed at our approach, and would scramble noisily into the forest. 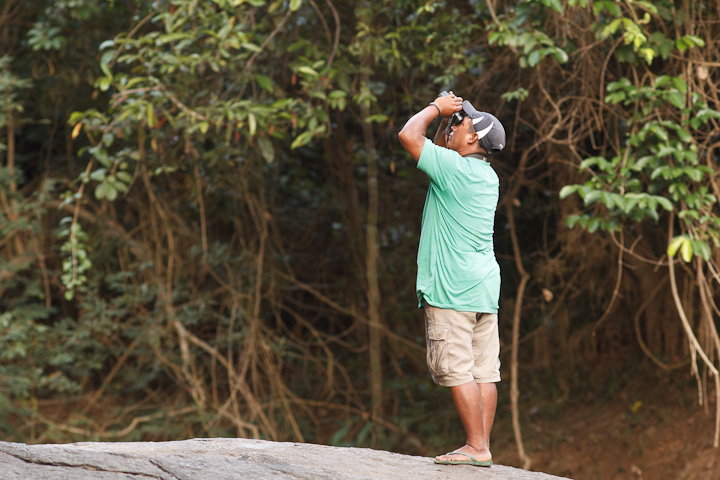 Rambo checks out some tanagers high in a tree. We didn’t often see smaller species along the river, and in fact I found sedentary camp life in French Guiana was better for seeing these types of birds. What an awesome job it must be to guide people upriver in such an awesome place. If I had the means to do so, I think this is something I might like to do one day.