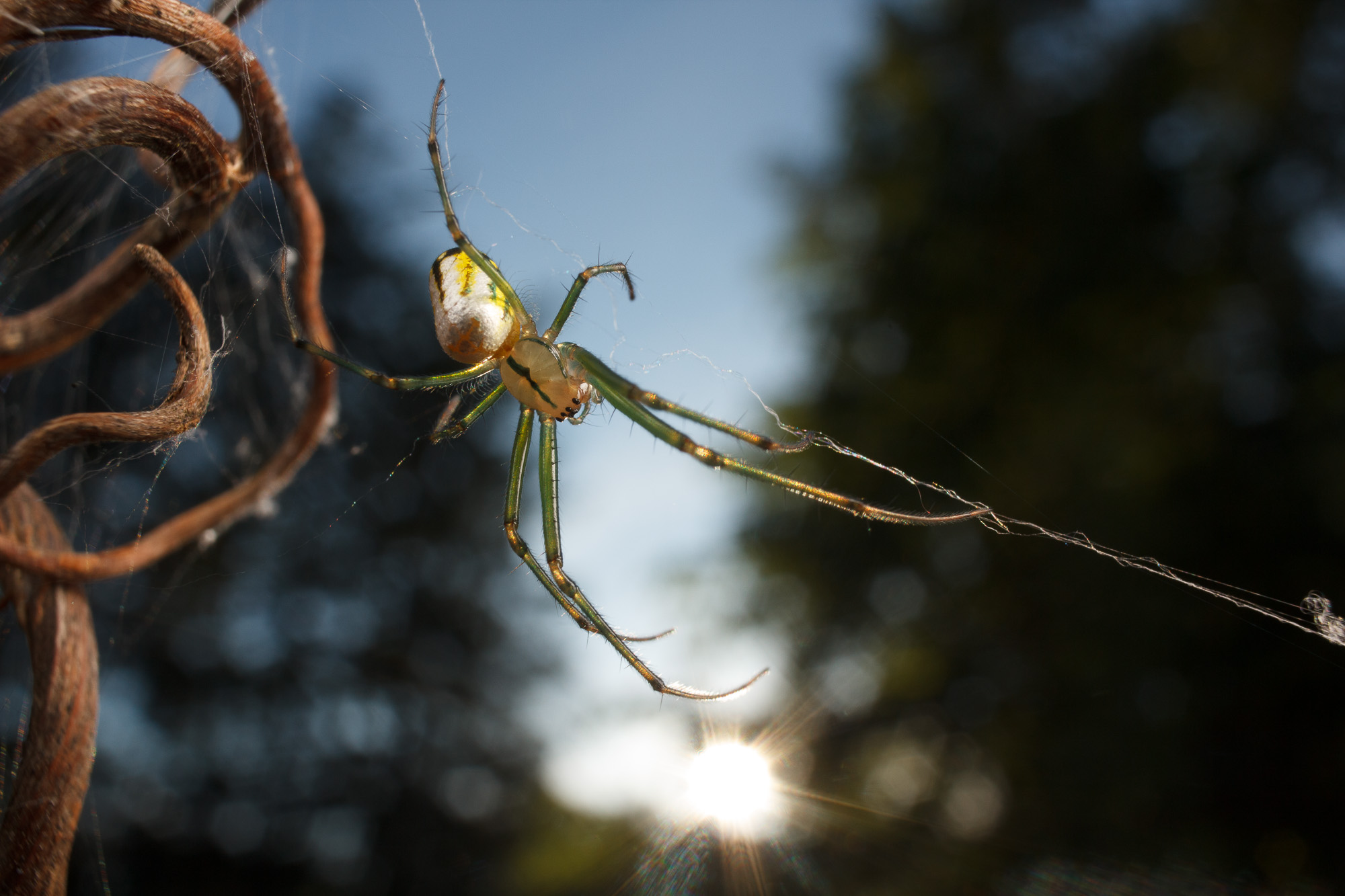 When I have not been blogging for a while, I usually start posts off with a bit of self-flagellation, followed by apologies and a promise to do better in the future. But to heck with that, what about a bit of shameless self-promotion instead? Nah, that does not work either.

But something wakens Ibycter from her mighty slumber, and that is as shameful desire to take part in Science Borealis’ People’s Choice Award:

Now, for the self-flagellation: By no means can I hope to be the people’s choice in this, or anything, as my blogging has been abysmal the  past year. But I have been doing regular sci comm activities on Twitter where the majority of our current fieldwork on black widow spiders has been communicated. Of course, I have been throwing in a bunch of photography and the like, and often post images taken during my early morning sojourns to the fieldsite and beyond.

This season, I have been wanting to explore in more depth the possibilities of wide angle macro with an SLR. Last year, I was attempting to do so with the venerable A720IS, but I was getting really tired of having to trigger flashes via slave mode (it does NOT work well in the sunlight!).

So what wide lenses do I have? Well, the widest has got to be the old 18-55 kit lens, and often-derided, but actually quite nice little stabilized zoom lens, sold with many Canon kits (other manufacturers often have one too). My copy is a little on the old side, and the autofocus no longer works, but it should serve well for playing with.

So I slapped together a hideous contraption, added 12 mm extension tubes, and took it out a few times this season. I will show results in the wide, wideish, and definitely not wide focal lengths to give you an idea what I was able to achieve. 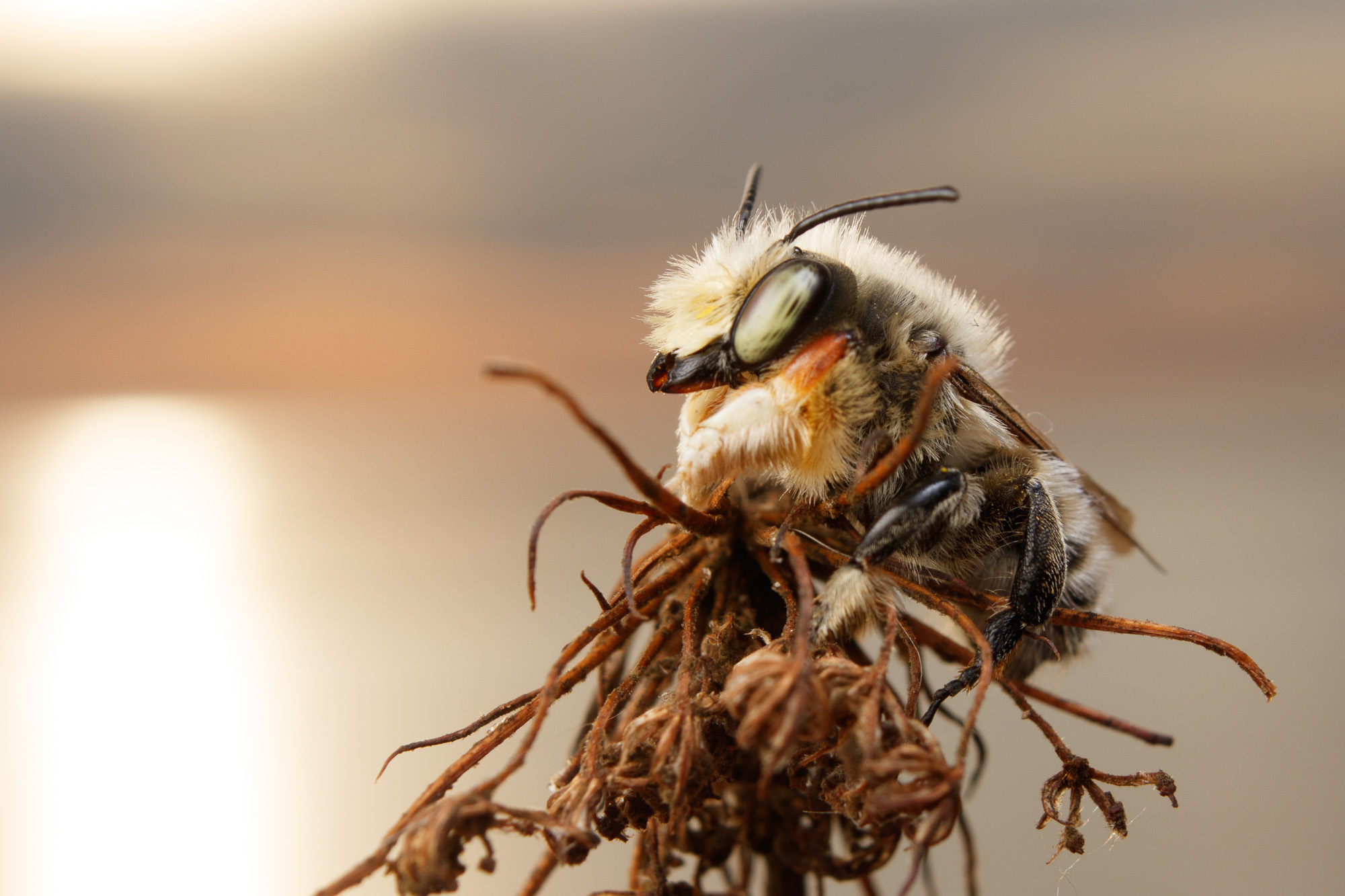 The 18-55 on 12 mm extension tube, zoomed fully to 55 mm. At this focal length, the lens serves well as a moderate focal length macro lens, with decent colour rendition and acceptable sharpness. This is an image of what I believe is Megachile perihirta. 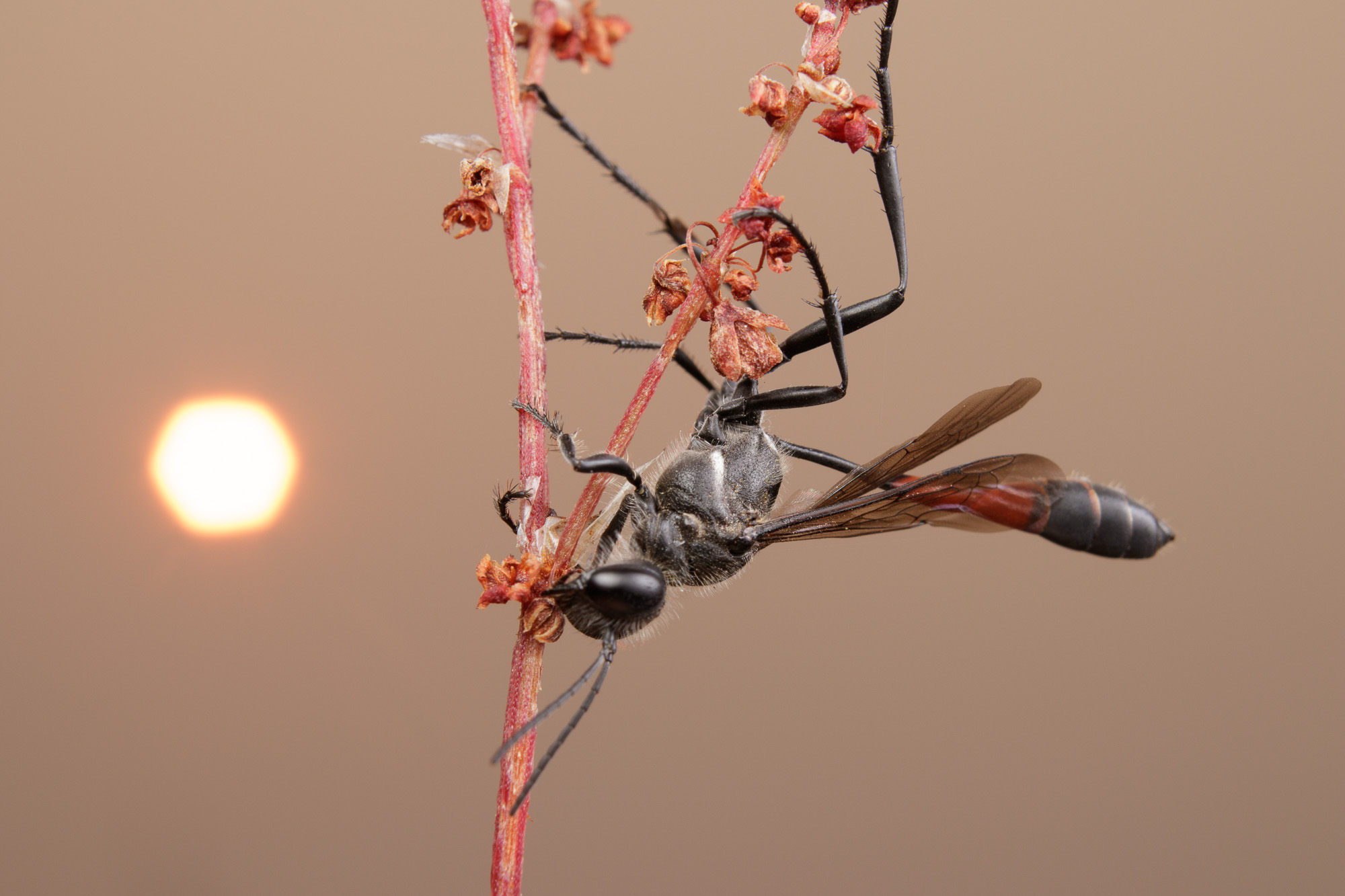 Here again at 55 mm, the lens shows good characteristics for macfophotography. The downside is the hexagonal rendition of out of focus highlights (in this case the sun)…Even stopping down to f22 will not round out these edges significantly. My advice is avoid such situations when shooting with this lens. 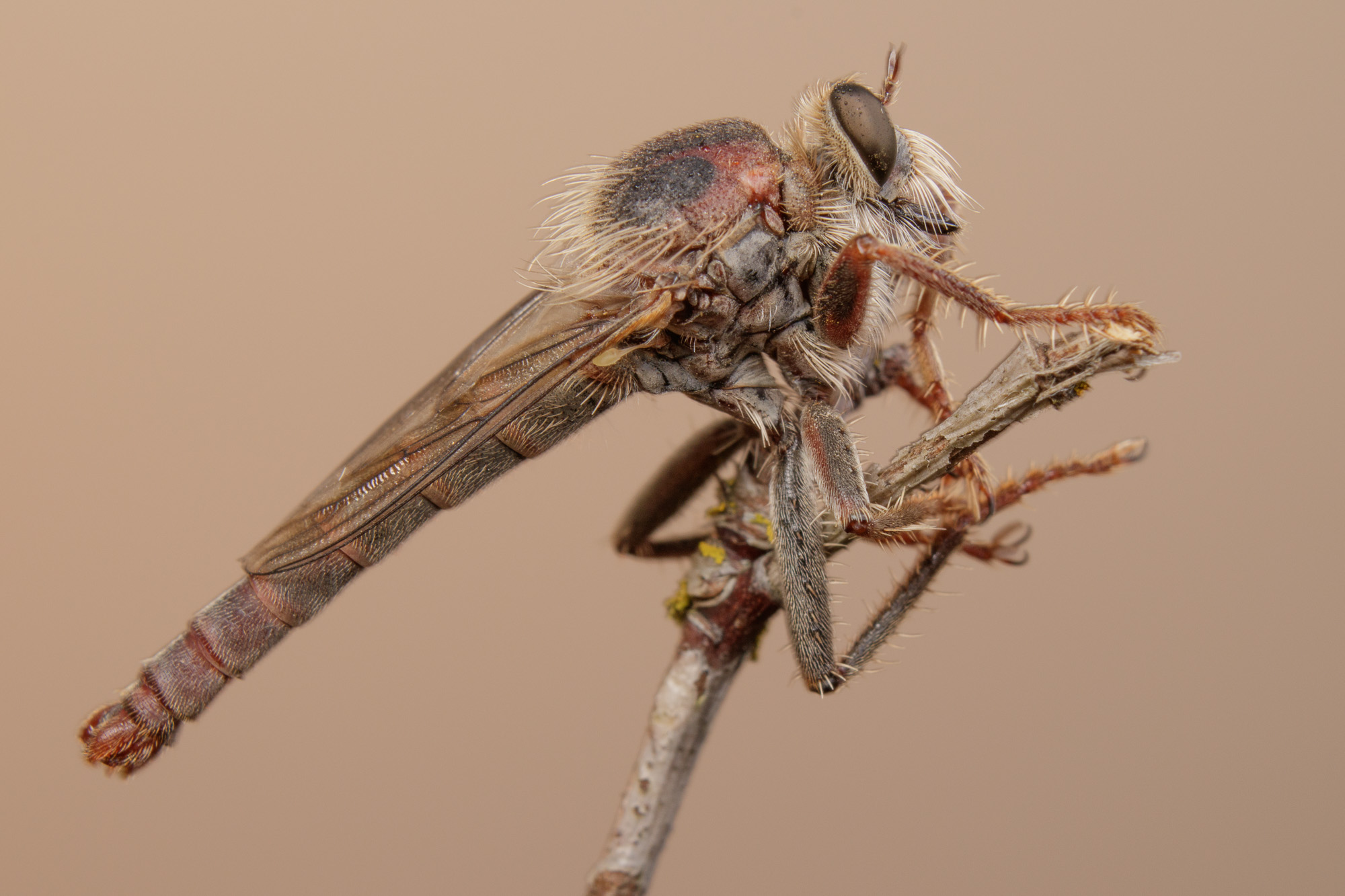 This image of Scleropogon bradleyi (a big late summer robber fly) is also shot at 55 mm. Pretty decent sharpness, not too bad with colour rendition and contrast. 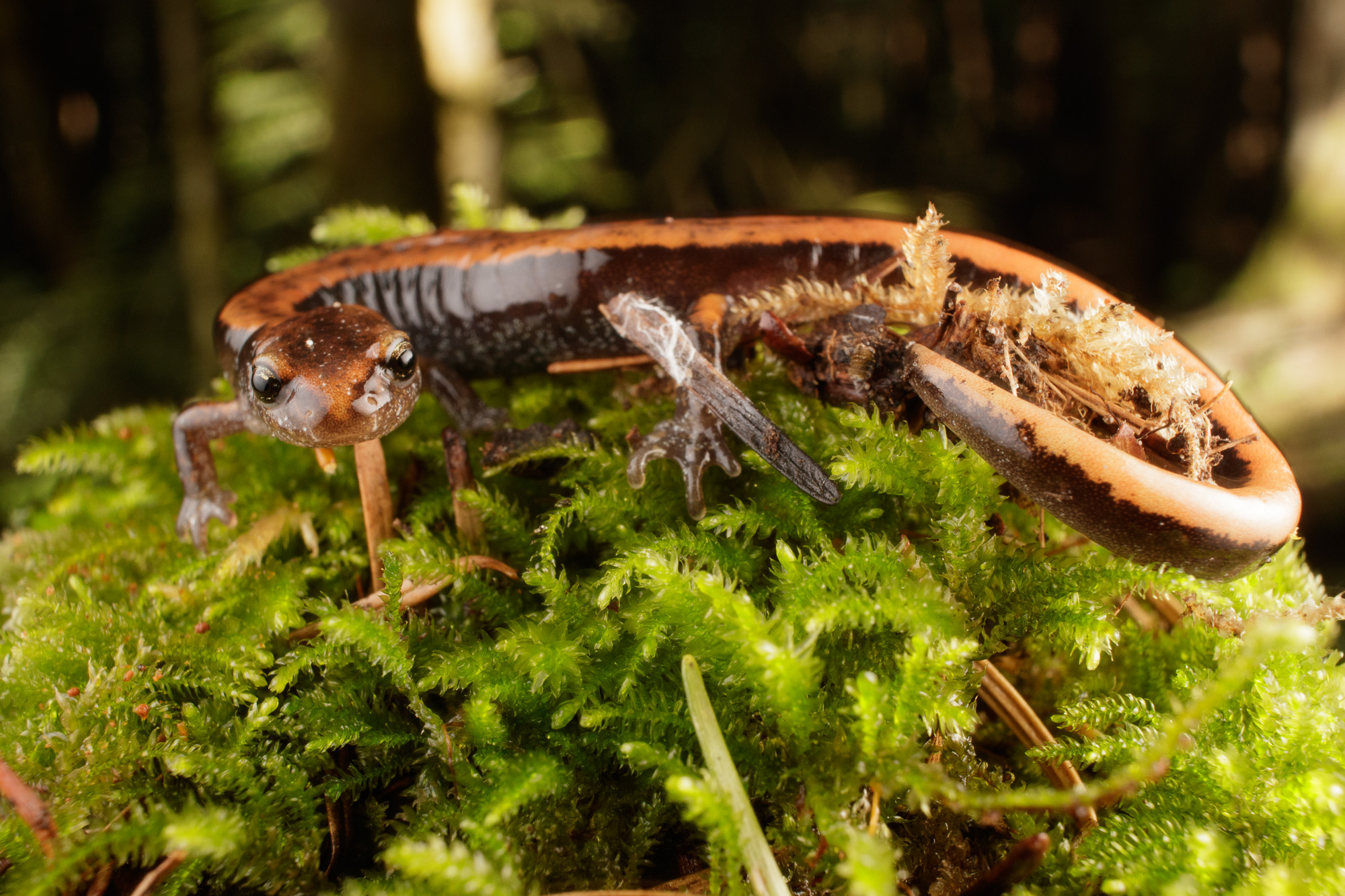 This image of a western red-backed salamander I shot at 25mm. It is wide-ish bringing in a bit of the background. 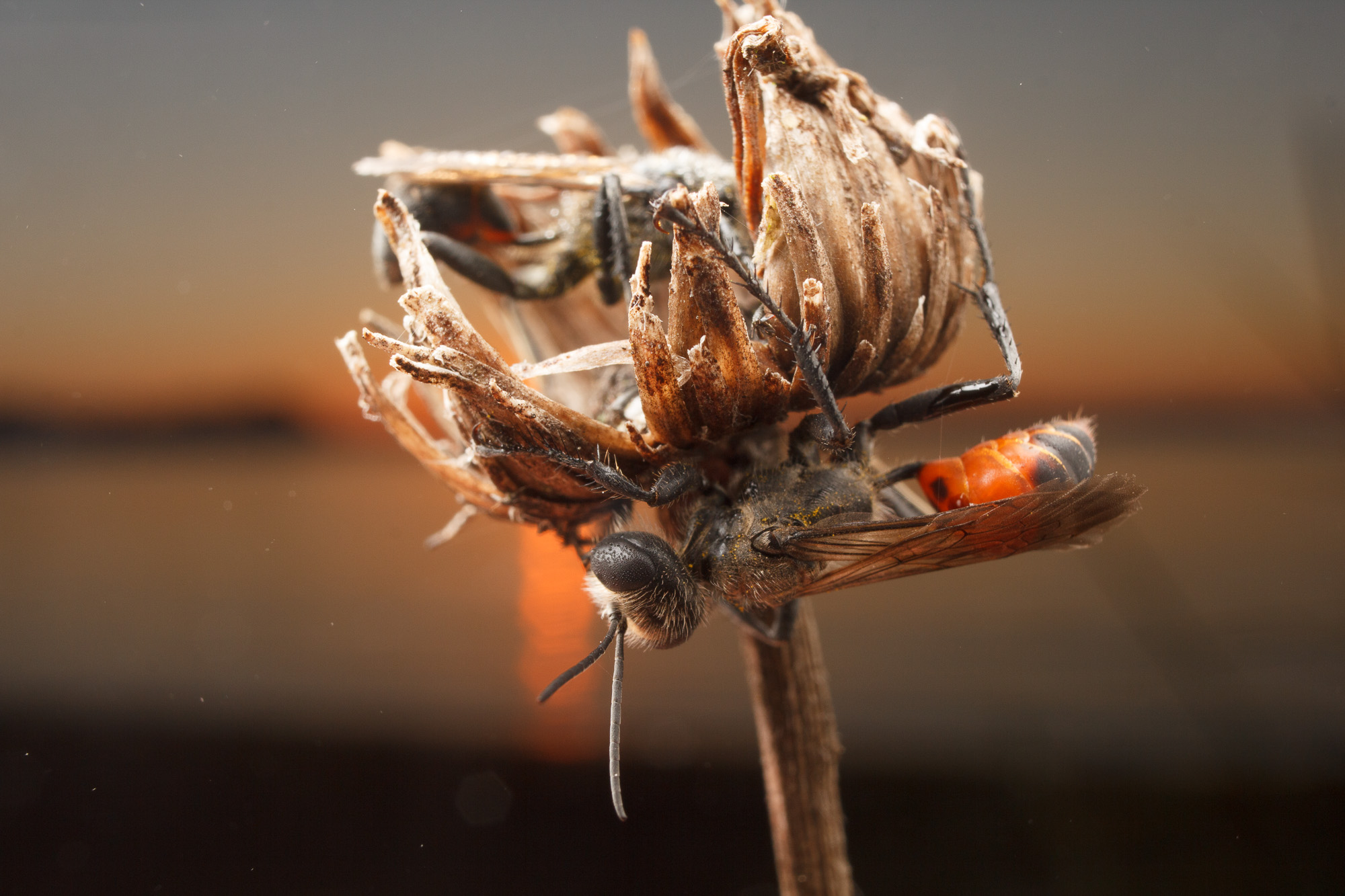 This image of Prionyx canadensis (a sphecid wasp) was shot at 27 mm. It brings in a decent amount of background, showing that this was shot by the water at dawn. Note the hexagonal highlight below the wasp’s head. This is a harbinger of bad things to come… 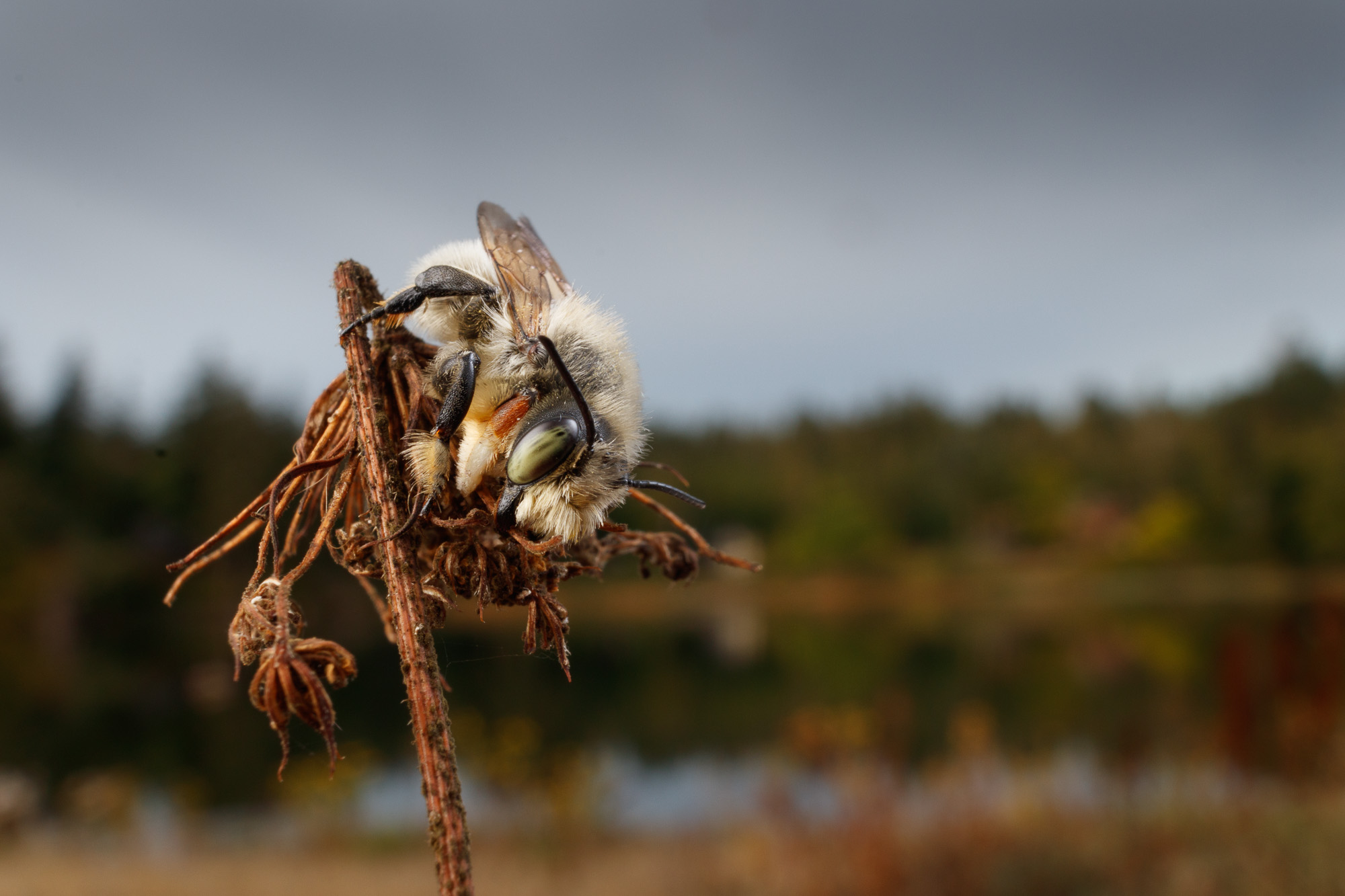 Another shot of the Megachile male, showing it in front of Albert Head Lagoon. This was shot at 25 mm, and I was quite impressed with the contrast. 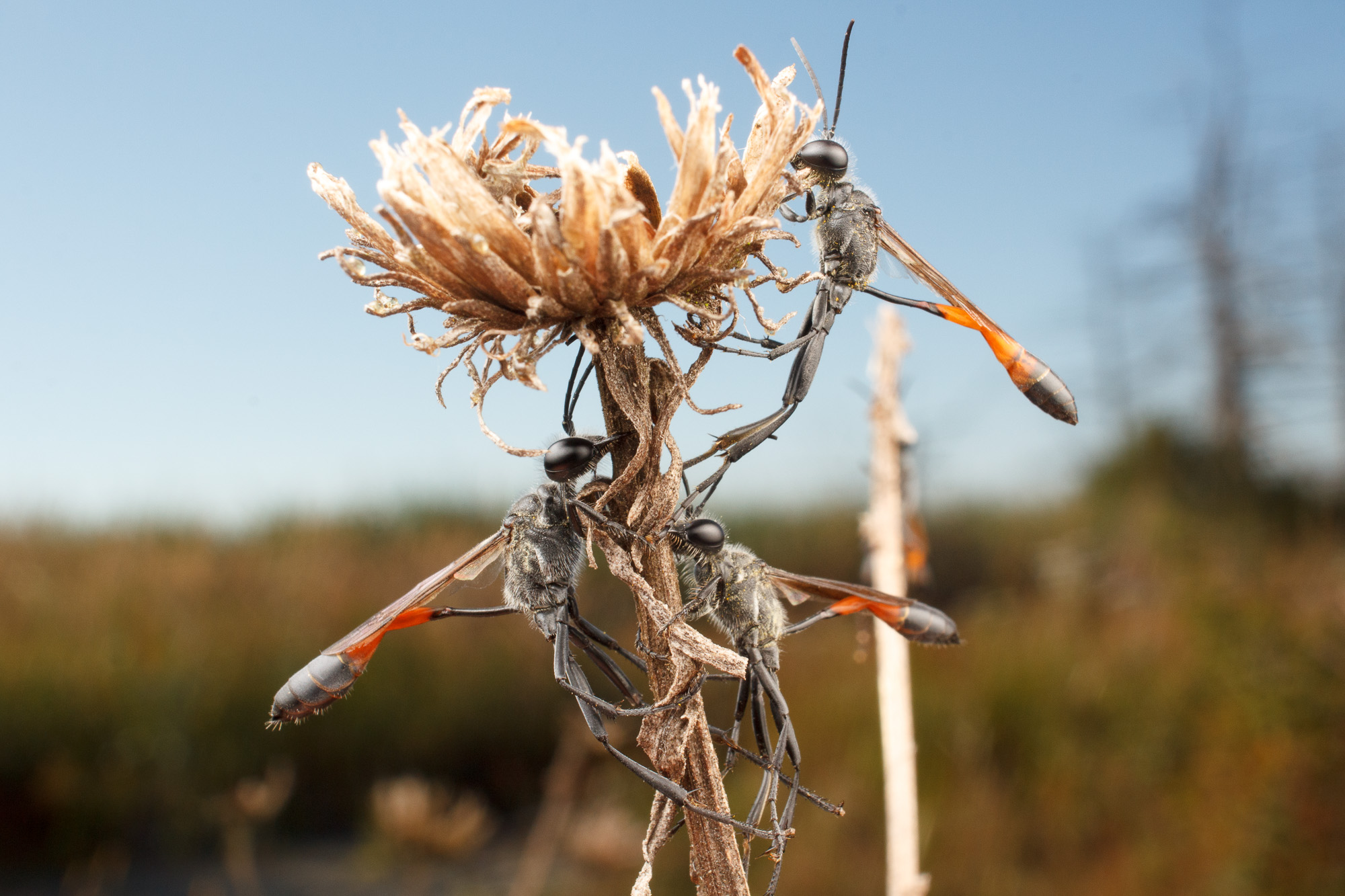 A group of Ammophila resting on Puget Sound Gumweed. This I shot at 28 mm, and I do like it… 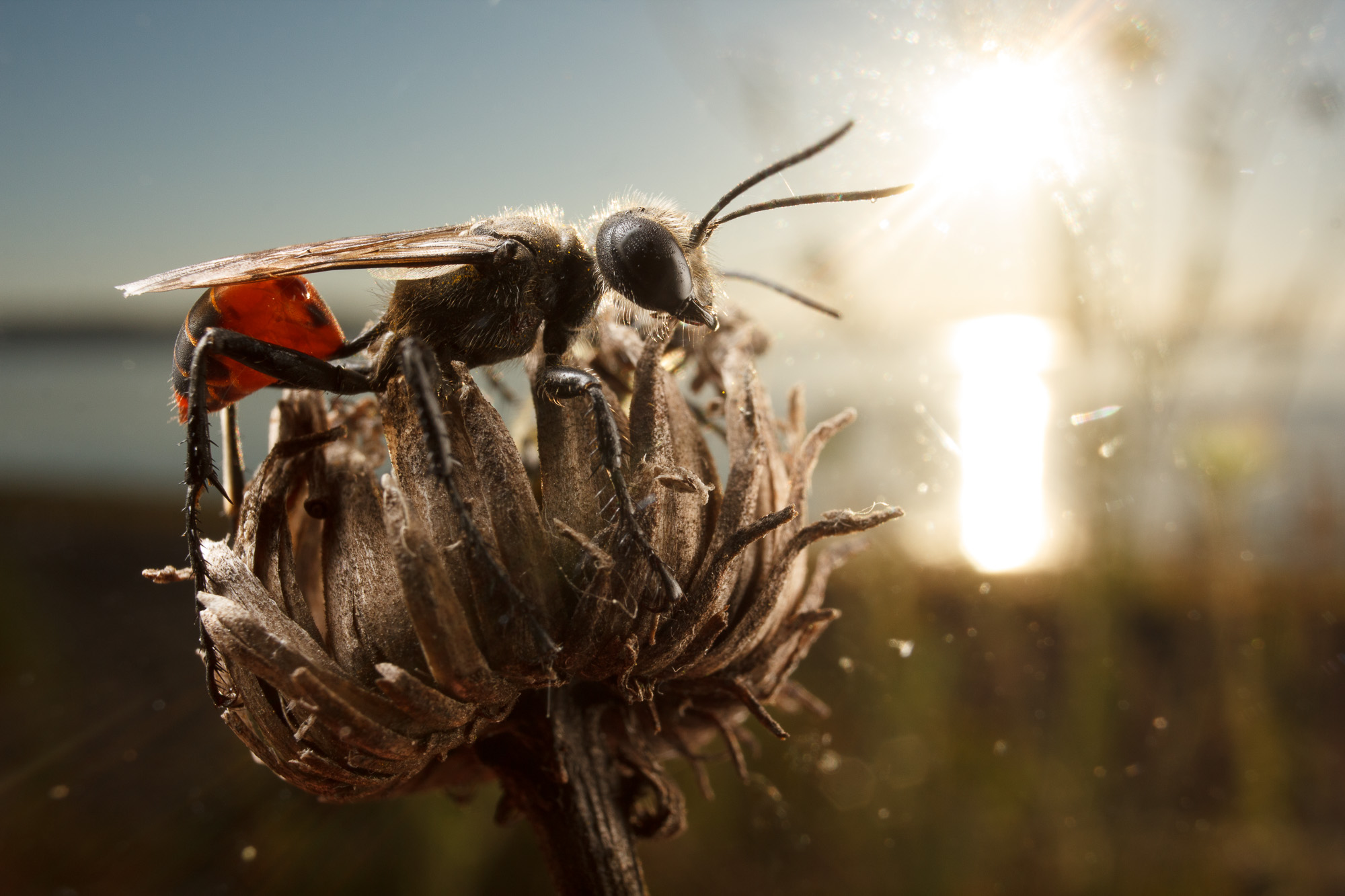 This is a shot at 18 mm, as wide as it goes. Yikes! Look at all that crap! This focal length is very close with a 12 mm tube, and the point of focus is very near the front element. This means that crud in, on, under and around the front element is fairly well in focus. Being a zoom, the interior of the lens is definitely not pristine. This problem is exacerbated by the need to pump light close to the lens, resulting in ugly flaring of the crud as the front element is obliquely illuminated. I ended up removing the front element for a good cleaning, but the problem has not entirely disappeared. It is more manageable though. 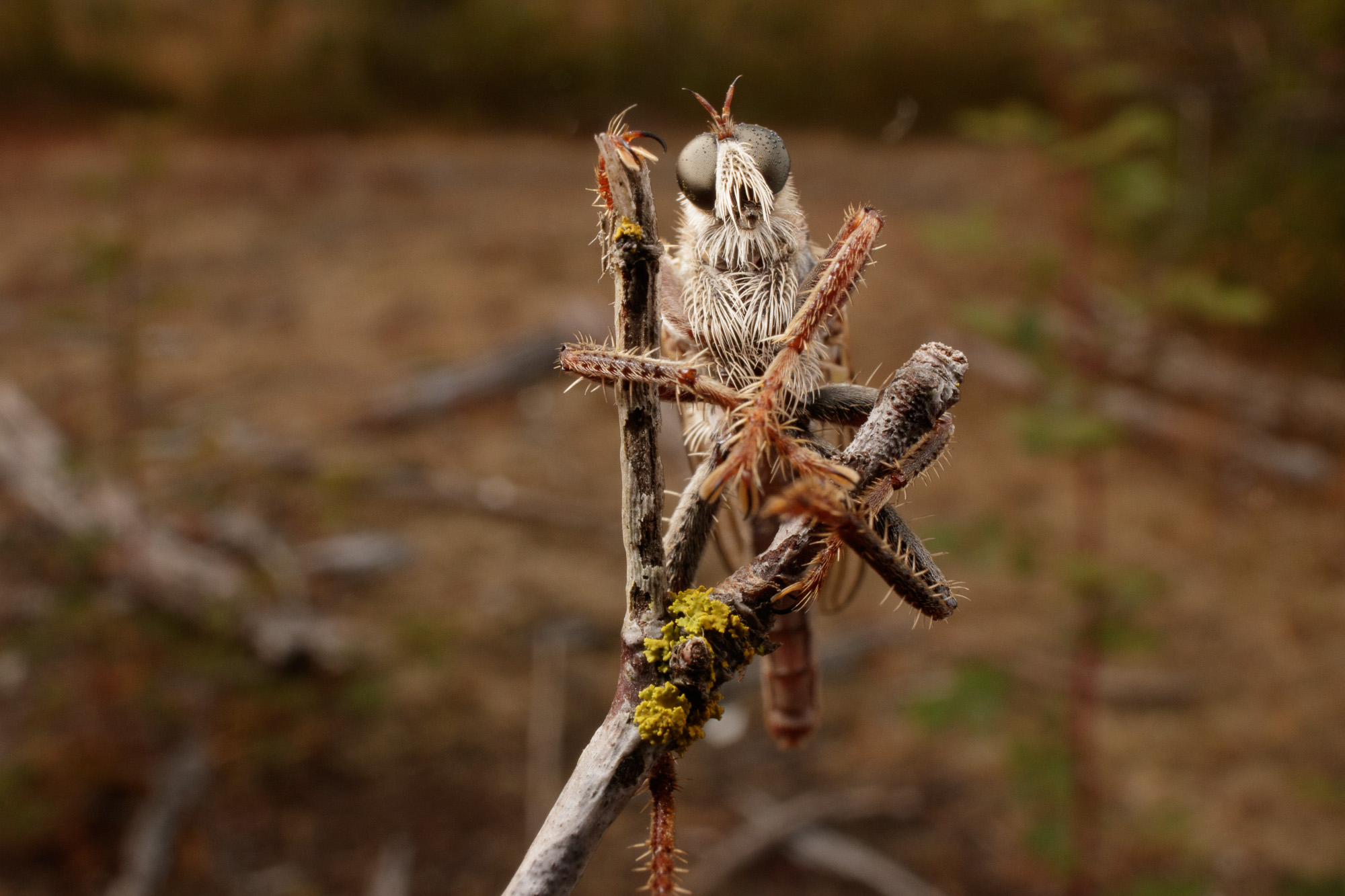 Here is a shot with less sky, again at 18 mm. This shows nicely how the background is not fully blurred, and the scattered logs and moss of the habitat are visible. 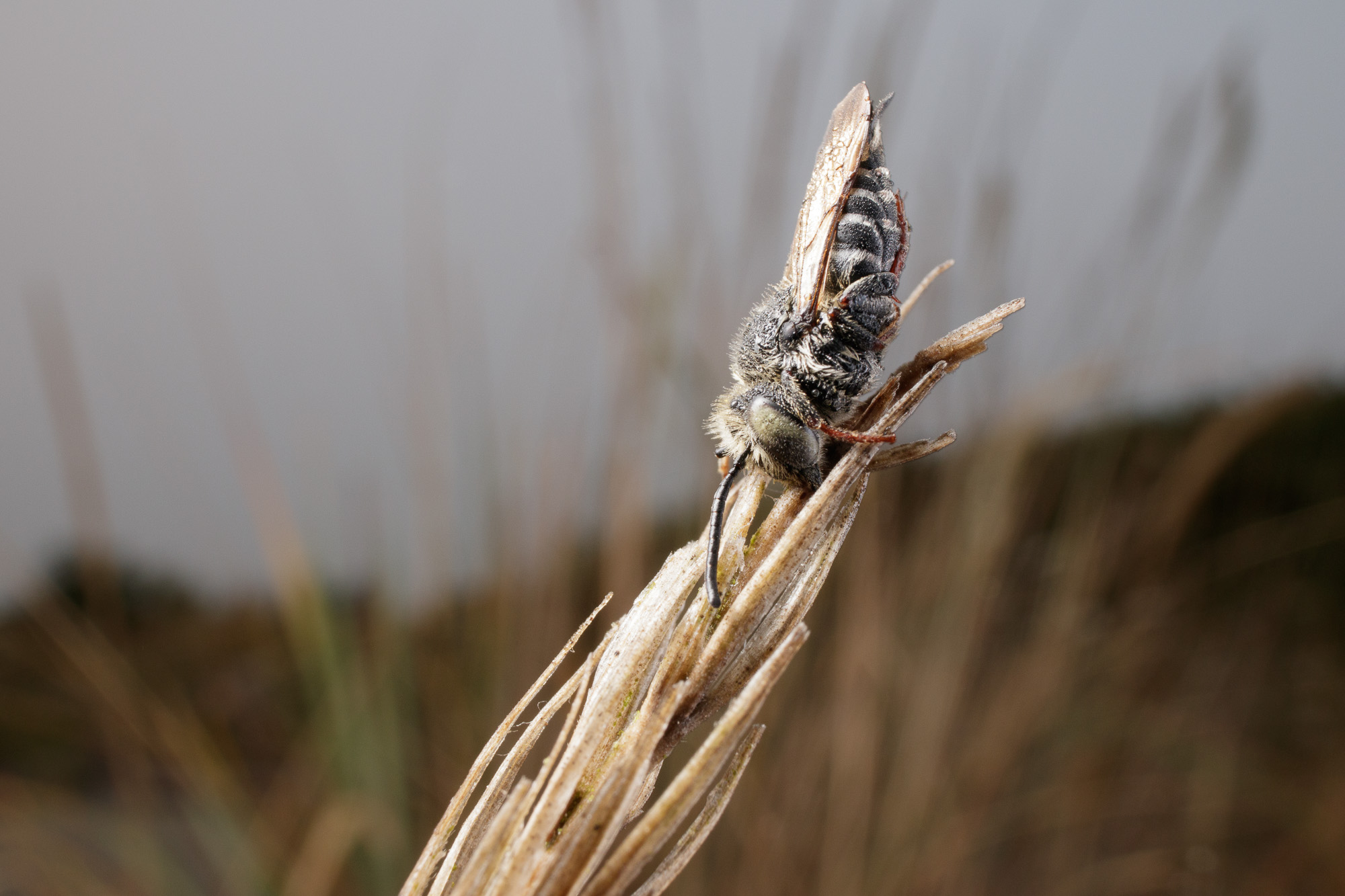 What would a post be without a Coelioxys? Here is one on Island View Beach, sleeping on grass. This too was shot at 18 mm, and brings a bunch of the background elements into semi-focus.

I will sum up in a future post, but for now, let me state that the 18-55 is an underrated lens. It is tricky to use at the widest setting, but at moderate and long focal lengths is a decent stand in for a macro lens. The hexagonal highlights are not very attractive, but given care as to the field of view and lighting, it is very usable for both short tele and wide-angle macro. I have not tried it with autofocus, as my lens will not do this anymore (maybe I will get the guts to rip its guts out one day and fix it), but at the distances you will have to light macro subjects at, autofocus would be more of a hindrance.

Tomorrow, I will cover another option for cheap wide (ish) angle macro, which I actually found to be much more enjoyable and higher quality than the 18-55. I will also cover briefly how I used both of these lenses.