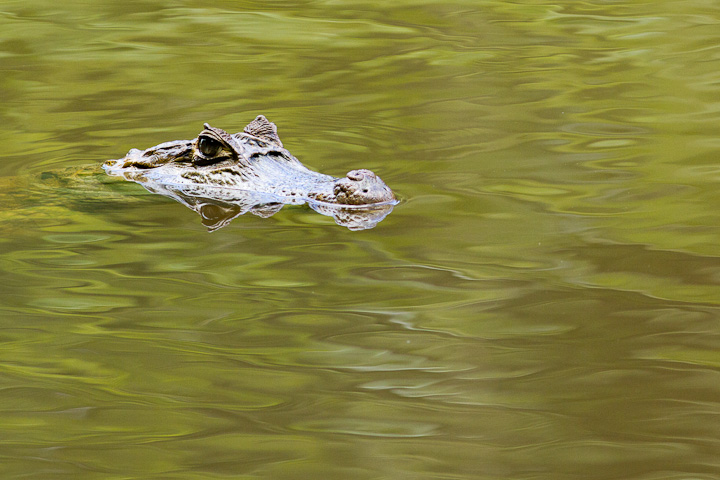 On my trip to Guyana, I was not only on the lookout for birds, but also their relatives, the crocodilians. Guyana is home to 4 species of caiman, including the largest and smallest species in the world. 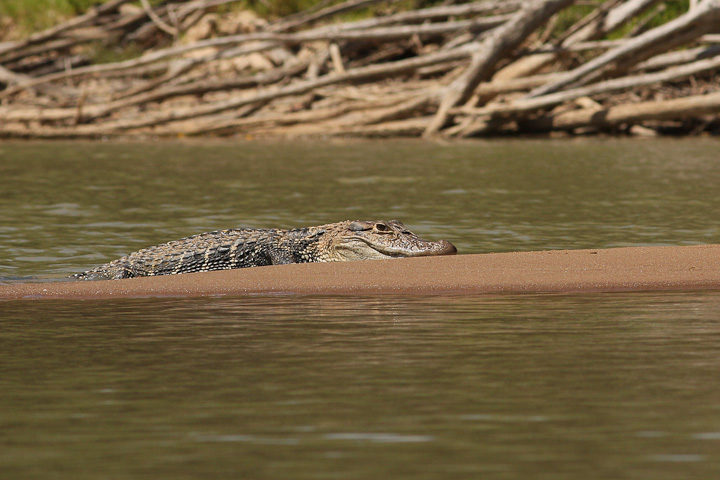 On the Rupununi and the lower Rewa, I was amazed at how many black caiman there were. Paleosuchus niger is the largest caiman, and in my mind I still thought of them as very rare. Conservation efforts and a reduction of hunting have caused a definite improvement for this beautiful species across their range. 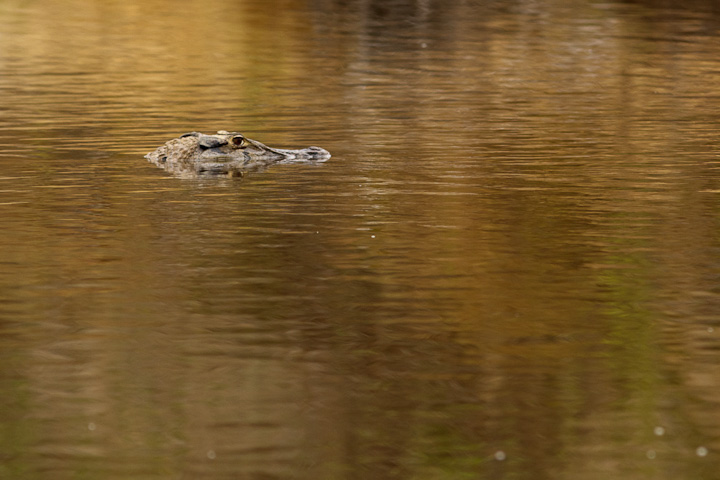 These large caiman can be dangerous, so while in their territory we made sure to bathe in shallow water where we could see them coming. With predators such as this, you are probably safe if you do not enter a good ambush zone, such as a place with a steep dropoff.

Rambo holds a baby black caiman, which we found in an aggregation near our camp one night. In Rambo’s hometown, Yupukari, there is a conservation and research outfit called Caiman House where the locals participate in monitoring and study of black caiman. Rambo has experience capturing, tracking and nest monitoring these impressive animals. 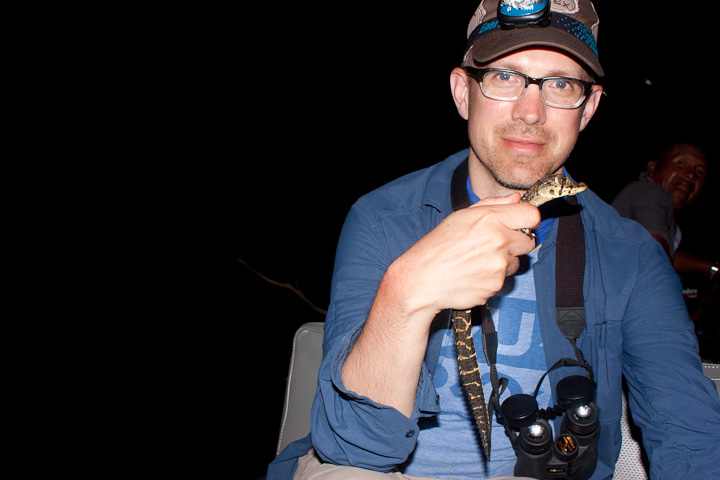 Jonathan posing with a beautiful little caiman. The babies tend to stick to protected “nursery” areas, as they are easy prey for birds and large fish. 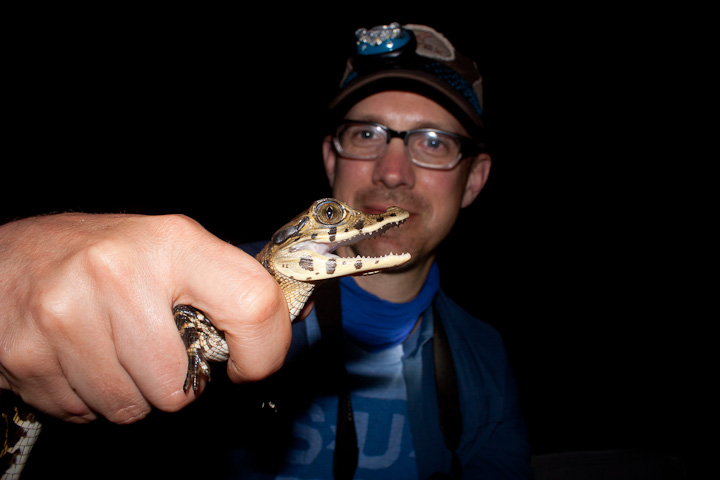 If you want a juvenile caiman to open its jaws, a little tickle on both sides of the base of the lower mandible will produce this posture. 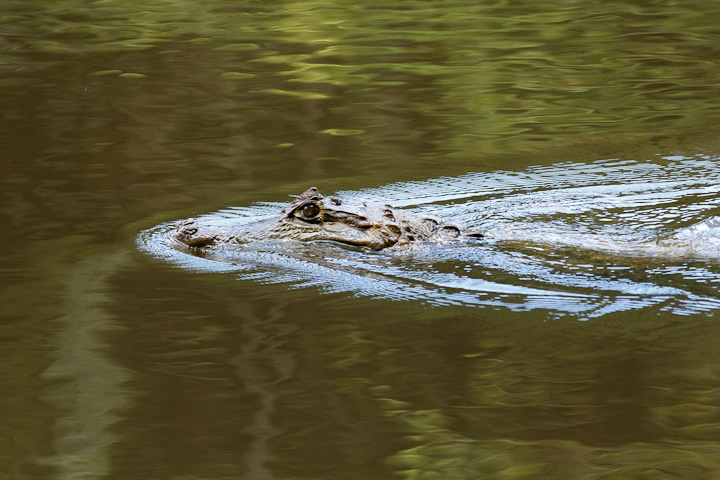 Above the major rapids, the Rewa is devoid of black caiman, and instead spectacled caiman and dwarf caiman abound. Here is a Schneider’s dwarf caiman cruising by our camp. I had seen Cuvier’s dwarf caiman in French Guiana (small ones living in small fast creeks), but seeing the adult Schneider’s was a revelation. These guys get fairly large, and inhabit even slow-moving sections of the river. 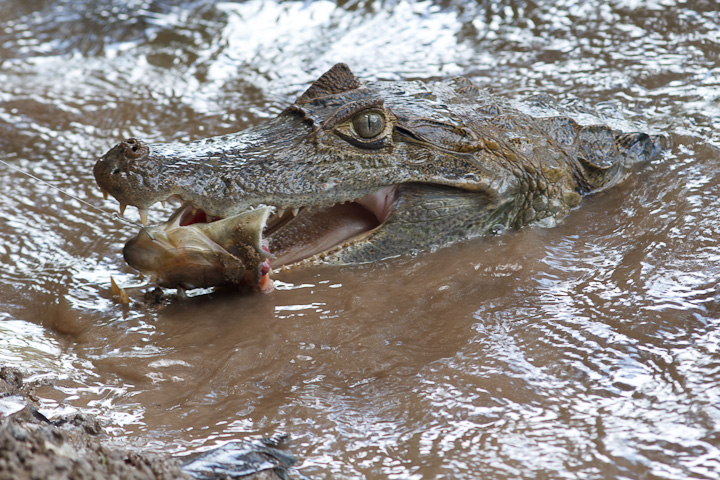 Brian tossed a piranha piece at this dwarf caiman, and it seemed to know exactly what was going on. It has probably seen several fishing groups upriver and has learned that when a boat pulls in, fish pieces from cleaning are often tossed out. This one had some fishing line attached, so we could try to haul the beast into shallower water. By the time the caiman got it’s feet planted, any further movement of the caiman was impossible! 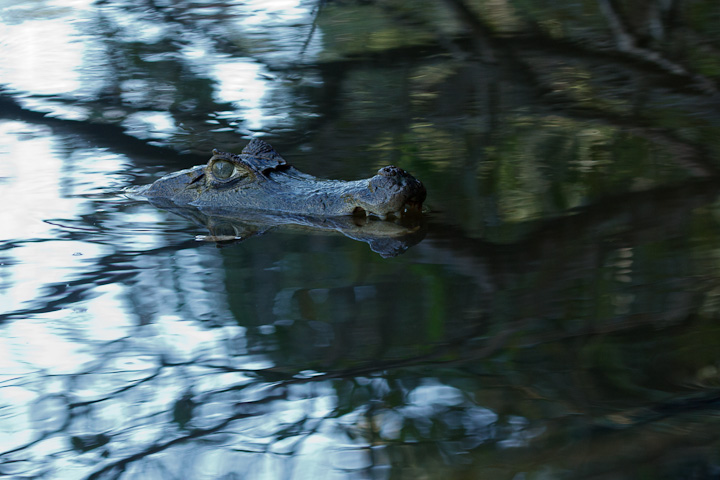 All of the crocodilians we met were quite shy, and even large black caiman would flee if we caught them in shallow water. This dwarf caiman was willing to come for tossed fish, but not if we were too close to the water’s edge. 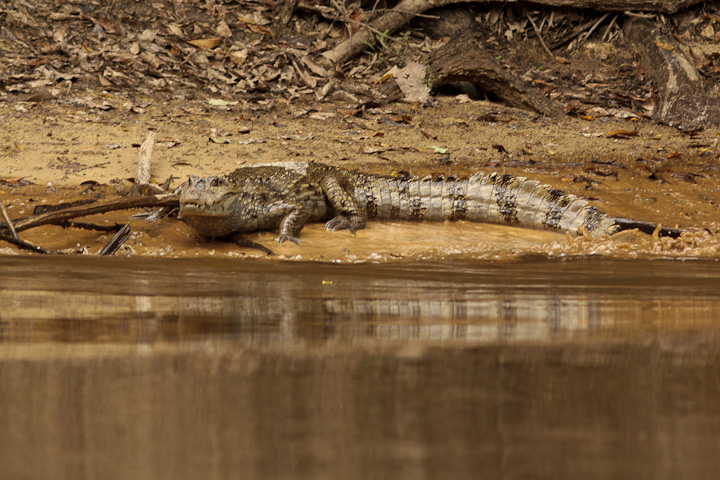 Some of the bolder caiman would stay on the bank as our boat passed, but most of them would flee for deep water. 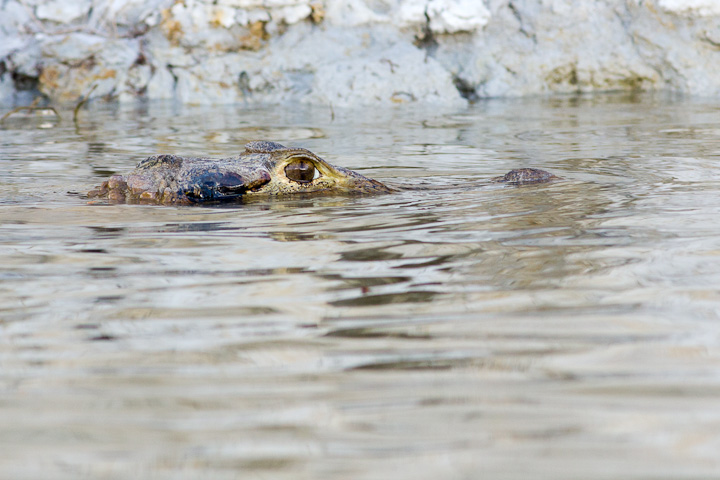 If you go out in the woods in the tropics, be sure to look out for the local crocodilians! They are fascinating and beautiful animals.

A lesson in how not to infer predation…

Is this bird plotting a murder?

Red-throated Caracaras (Ibycter americanus) are impressive birds that are  brightly coloured, extremely loud, and travel around the forest in gangs.  They seem to act as if they own the forest, and alarm call vigorously whenever they see you or any other potential threat. I have seen them chase away Harpy Eagles (as have others!), as well as Toucans.

Sounds like a badass bird! If you do a Google Scholar search for “Red-throated Caracaras and Predation“, you might find some surprising things. In the primatological literature, they are listed in several papers (1-2) as being predators of Saguinus mystax, the Moustached Tamarin, a small monkey. This is quite odd, as to my knowledge there is only a single account of Ibycter americanus taking vertebrate prey: Anolis and Ameiva lizards found in the stomach of a single bird shot in Mexico (3).

Certainly, other caracara species, such as the similar, but more distantly related Black Caracara (Daptrius ater) do prey on vertebrates. The Black Caracara has been reliably reported preying on fish (4) and juvenile caciques (5).

But the Red-throated Caracara is a different species, with different habits, and is not well-known to take vertebrate prey.

So where does this idea come from?

All the references that I could find about predation on tamarins by Red-throated Caracaras come from a thesis (6) by a researcher named Maria Marleni Ramirez entitled “Feeding Ecology and Demography of the MoustachedTamarin Saguinus mystax in Northeastern Peru”, published in 1989 at the City University of New York. The exact passage about this predation incident appears on page 87 (Daptrius americanus is a former name for the Red-throated Caracara that is no longer used):

“Raptors flying overhead invariably elicited strong alarm responses from the tamarins. Moustached tamarins gave several alarm calls per day that were apparently directed towards birds, thus suggesting that they may be important predators of tamarins. The tamarins’ reaction to attacks by raptors was very strong, as indicated by the loudness and duration of the calls. Daptrius americanus was observed to attack and barely miss a juvenile S. mystax. The moustached tamarins reacted by giving very loud screeches at the same time the Daptrius was diving towards the juvenile.”

Now to be fair, I have been attacked by Red-throated Caracaras (see video), but I never have inferred from this that these birds were trying to prey on me (Although one did strike my ear while I was climbing their nest tree). Or perhaps I didn’t take it personally!

The following video was taken by Tanya Jones in 2009, and shows a group of Red-throated Caracaras diving at me as I climbed their nest tree. I am located right behind the bromeliad; part of my foot is visible below.

And that is the danger of inferring predation by witnessing one antagonistic encounter between two species, with no video records or stomach contents. Because in my book, predation involves killing and eating the prey, and this was not observed here. In fact, my research, as well as one other study, show that the predominant food items consist of wasp larvae and fruits (7,8), with not a single vertebrate among them. I would not say that Dr. Ramirez’ observation constitutes predation.

’cause doesn’t this look better than a monkey?

What I interpret this situation to have been is a mobbing attack on monkeys by caracaras defending a nest site, or merely defending their territory from occasional nest predators. I have seen caracaras chasing Toucans in a similar fashion. I have no doubt that the caracaras could kill, and possibly eat a tamarin (They have an average mass of around 500 g, or roughly the size of a small caracara), but surely some stomach contents would have showed up to indicate such an event. Other than the account of lizards in the one shot in Veracruz,  I can find no such records.

Thus I think that it is definitely premature to list the caracara as one of the “known predators of Saguinus mystax”. Instead, I would probably put the two species in a long list of “animals in the jungle that don’t like each other very much” and leave it at that.

There is still much we do not know about this charismatic bird, or indeed about the trophic relations of rainforest animals in general, but hasty generalizations from a single observation are unlikely to improve matters.

During our 2009 field season, Tanya Jones (my field assitant in 2009-2010) was drying some Astrocaryum seeds to take as samples on a shelf in our carbet. The problem was, they kept disappearing. Tanya thought I had been taking them*, but I had done no such thing.

So we set up a video trap to catch the culprit:

Mystery solved! So the lesson is, when you need to dry Astrocaryum, make sure they are in a protected location.

*I admit, I did like smashing them and trying to eat the flesh…don’t bother, it is very hard!

Update! Pierre-Michel Forget (the king of tropical forest seed dispersal specialists!) has directed my attention to a cool paper that describes the phenomenon we are seeing here, namely scatterhoarding by a Spiny Rat (Proechimys spp.). Check it out here!

Remember the Acuchi eating Astrocaryum? This time, a much larger rodent comes for some fallen Jackfruit (which incidentally smells like Juicy Fruit gum!).

This is a Lowland Paca (Cuniculus paca). They are some of the largest rodents in these forests, other than the massive Capybaras. This was filmed Feb 27,  2011 at the Inselberg Camp of the Nouragues Reserve in French Guiana.

The jackfruits are not native to these forests, but several were planted upon the establishment of the station (there are also some mango and citrus trees within the camp).