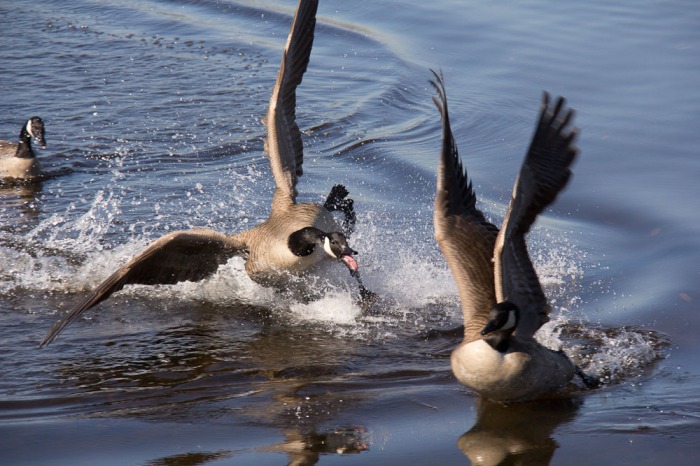 This Weekend Expedition is a composite of 3 trips, the first, on Saturday to Boundary Bay, where Catherine and I were shooting pics for the final Wild Research fieldtrip of the winter. The light was pretty awful for photography, but the trip was interesting nonetheless, as we were able to see several species of raptor (including some snowy owls) as well as various passerines.

Sunday I went out with Maia Smith to try out her Canon 7D, specifically the autofocus capabilities thereof for photographing birds in flight…I was amazed at how much easier it was to lock on and stay locked on to flying birds than using my own lazy Canon 60D. This point was driven home forcefully later that day in Deep Cove, where I was unable to get good focus lock on a Red-tailed Hawk and Raven sparring in the sky.   I really need to improve my technique with the flying birds, but perhaps in addition it would help to have a fully capable autofocus system…

Anyway, enjoy the pics below.

A rare image of myself, taken by Catherine

Catherine’s image of a young birder and his dad

Catherine’s image of a young birder

Here I am shooting Snowies…

Boundary Bay is still loaded with eagles, but mostly immatures like this one.

Catheirne ready with camera and binocs..

Another great shot by Catherine

This harrier caught a vole while we were watching.

Iff you pull down the blues, the mountains reappear even on a hazy bright day…

Late Snowies…Hopefully they will make it back home.

A rough legged hawk and an Bald eagle share a thermal.

First Mourning Cloak of the season!

This Snow Goose has taken a shine to a Canada Goose at Burnaby Lake.

Awww…Maybe we will see some hybrid offspring!

Other Canada geese are feeling their hormones in different ways.

Likewise the Red-winged Blackbirds were singing and sparring near the lake.

This was the one decentish shot I got…It didn’t help that my shutterspeed was too slow.

This is how trails near Vancouver look on nice days.