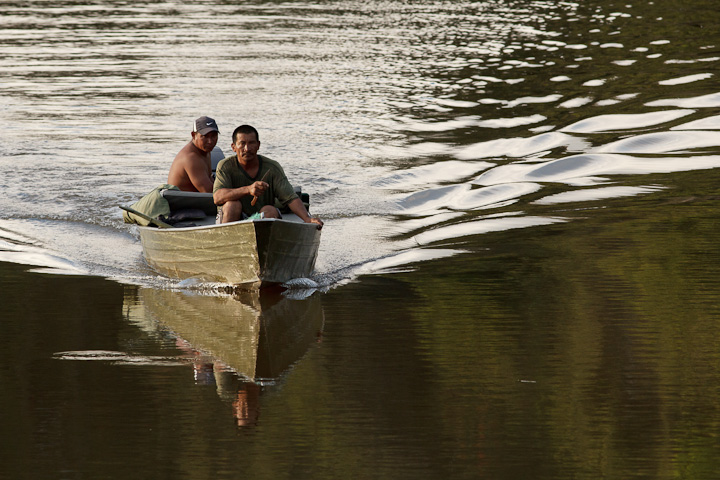 For the journey up the Rewa river, we were to travel into the forest by boat. From Georgetown, that involved a flight to the interior of the country. These flights leave from Ogle, a smaller airport on the outskirts of Georgetown. Our destination was Annai, a large Macushi village on the edge of the Rupununi Savanna, and close to our river journey start on the Rupununi river. 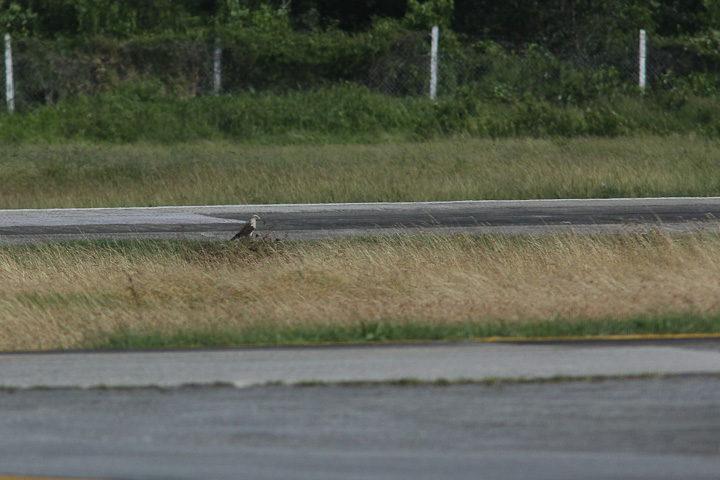 At Ogle is where we saw our first caracara! In the distance along the runway, a Yellow-headed Caracara (Milvago chimachima) forages in the grass. 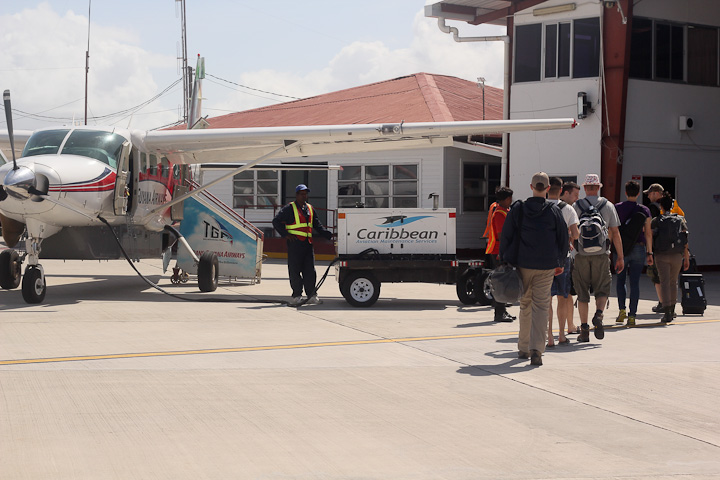 Boarding our flight to Annai on a Cessna 208 Grand Caravan operated by Trans Guyana Airways. 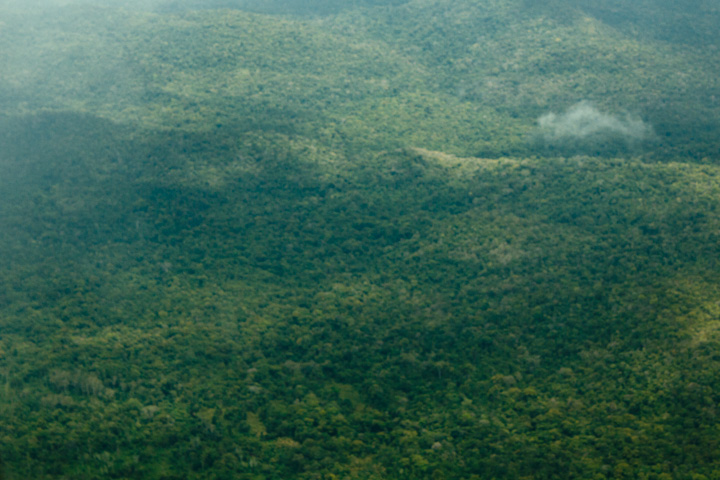 A high view of the dry season rainforests along the Essequibo river. 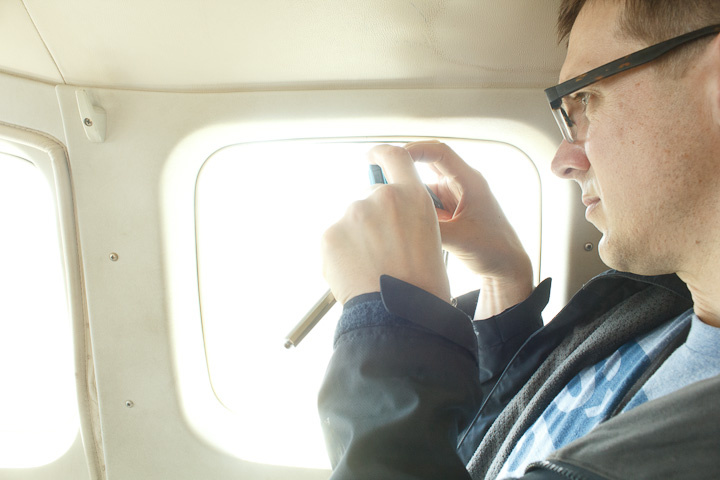 Jonathan takes pictures from the plane. 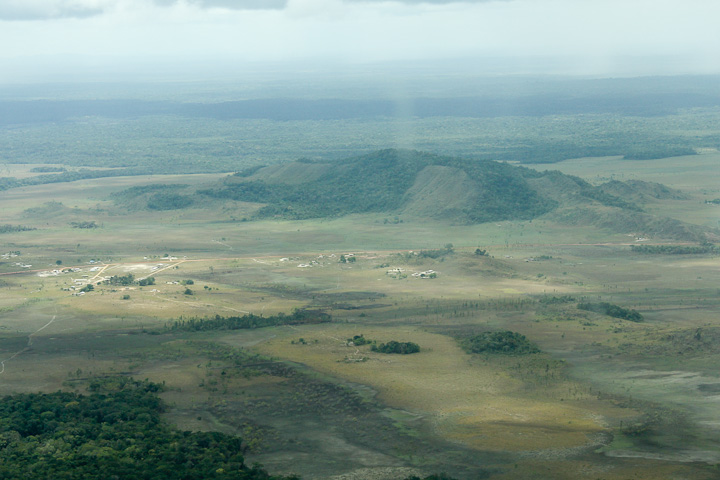 The village of Annai, on the edge of the Rupununi Savannah. 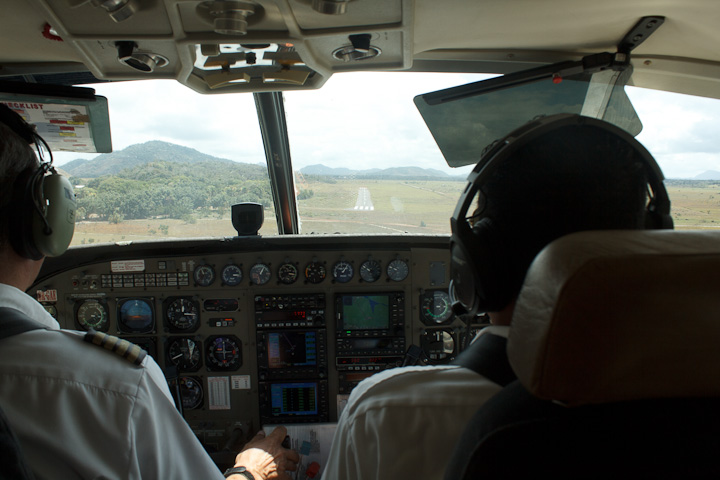 Coming in for a landing at the airstrip in Annai. 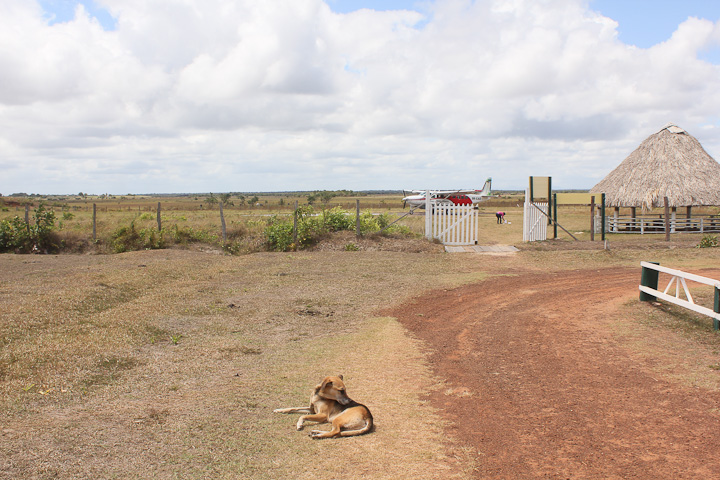 Leaving our plane behind, with the Rupununi Savannah stretching off in the distance. 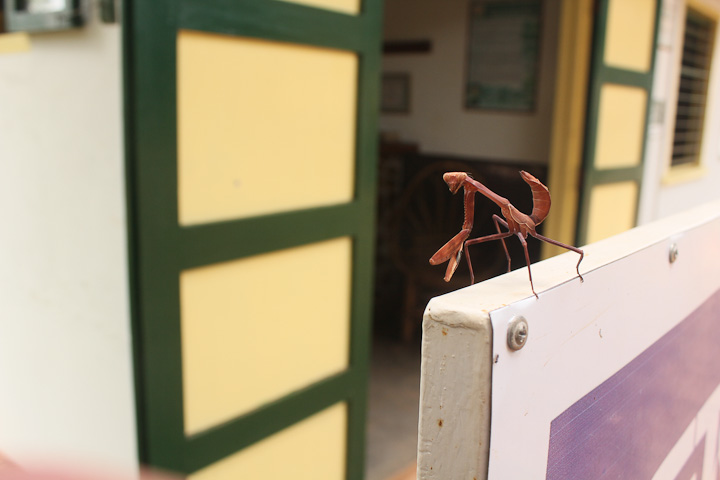 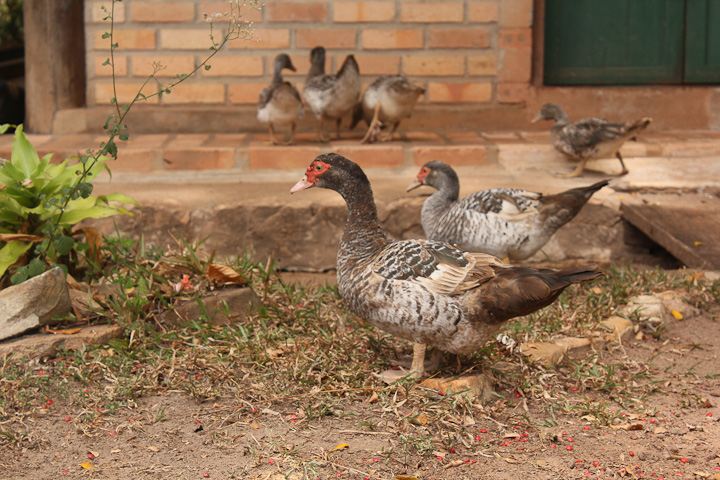 Domesticated Muscovy Ducks. The wild ones may be found just down on the river. 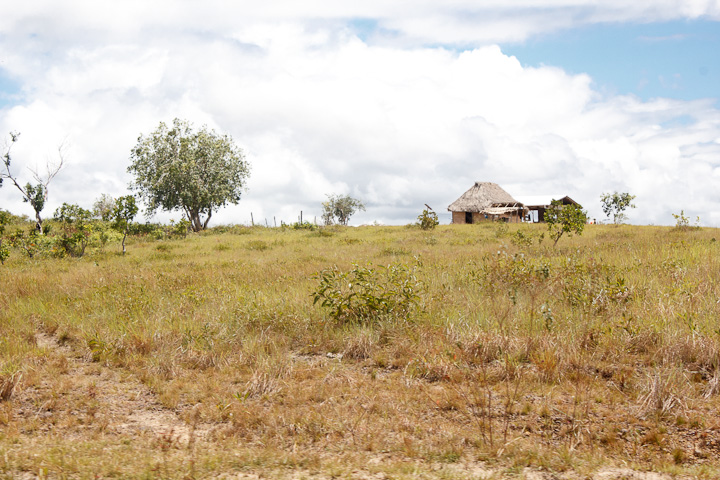 The dry season savannah is quite parched-looking, but in the wet season much of the area around Annai is actually swampy and criscrossed by streams. 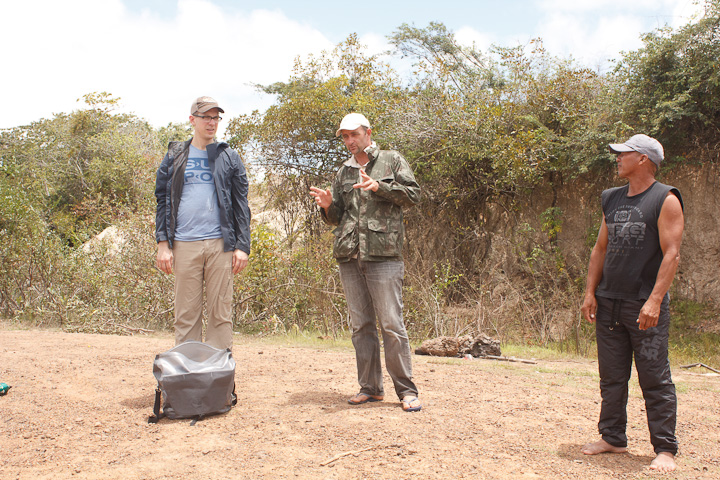 Here we meet with the owner of the boats we will be travelling in, Ashley Holland, owner of the Rupununi River Drifters ecotourism company based in Yupukari. 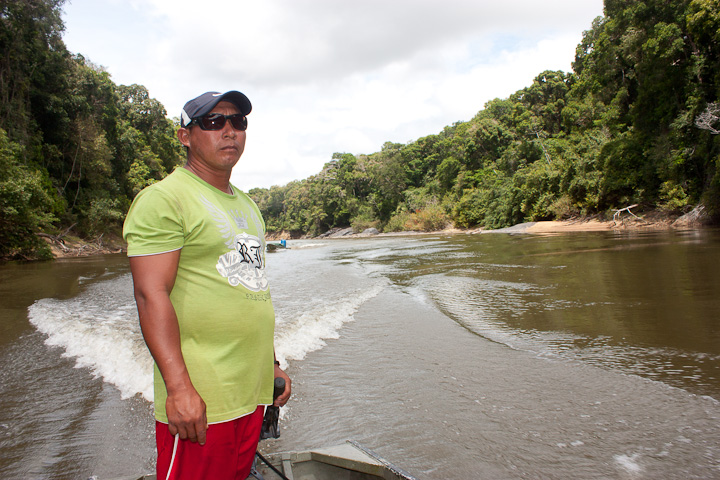 Our travelling companions and guides. 1: Rambo, a somewhat quiet guy who has an excellent knowledge of the local bird fauna. 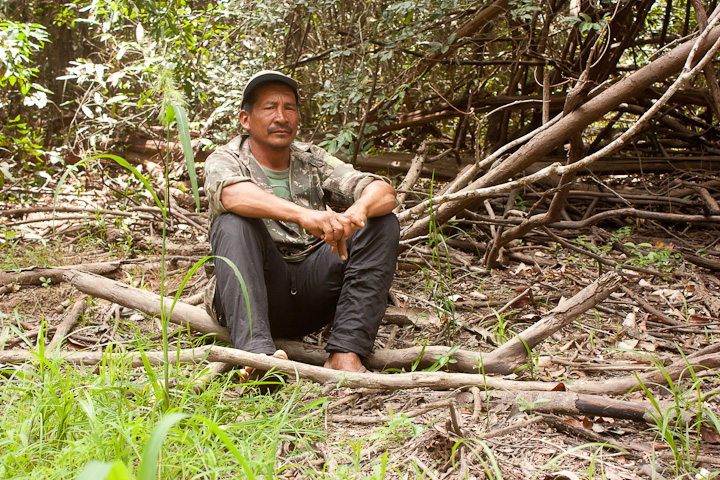 2: Josy, employed nominally as the cook, also extremely savvy in the forest creatures, particularly the black caiman. Affectionately known as the “YGP”or “young grandpa” as he has just become a grandfather! 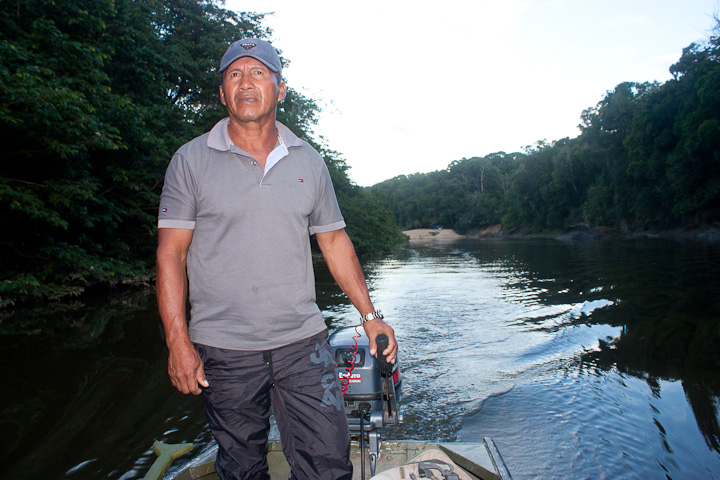 3: Brian, the senior boatman, a military veteran with amazing mental maps of the rivers at all levels. This is the guy you want navigating shallow twisting channels in the middle of the night based on dimly-seen landmarks.

We launched onto the river without much fanfare, heading downstream to the mouth of the Rewa river. For some idea of how the river looks in teh dry season, consider this picture of a Jabiru stork. 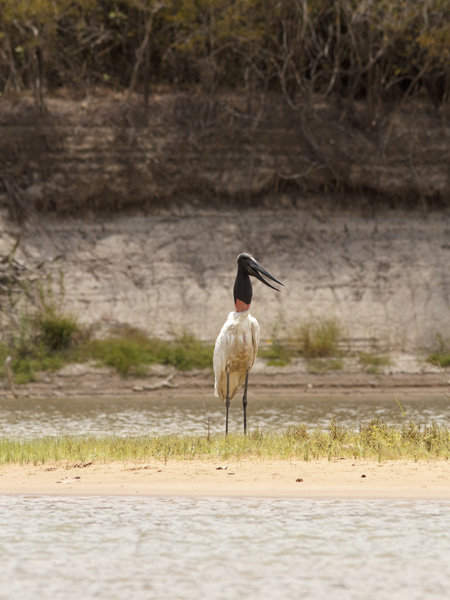 That high bank in the background would be completely inundated in the wet season. That is a difference of about 20 feet, and the river can rise that much in about a week. 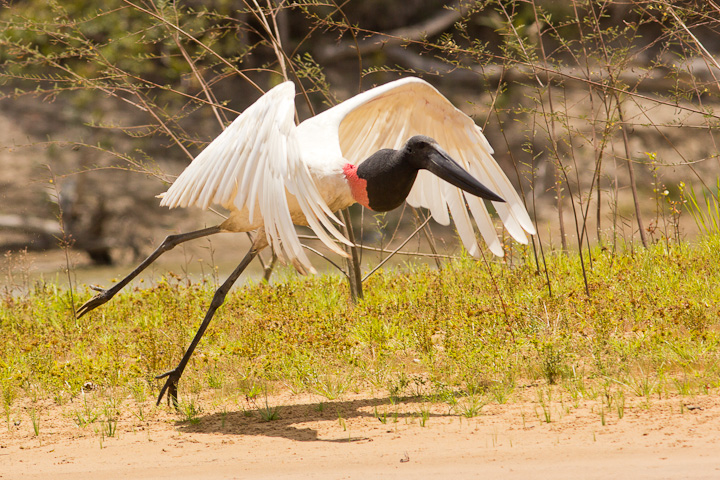 Now consider this other photo of the stork. Because it is cool. 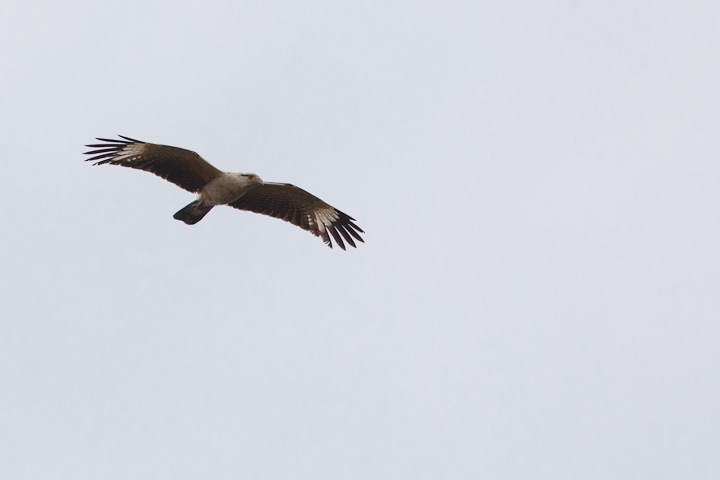 We were still in the savannah region, so we did see quite a few Yellow-headed Caracaras. 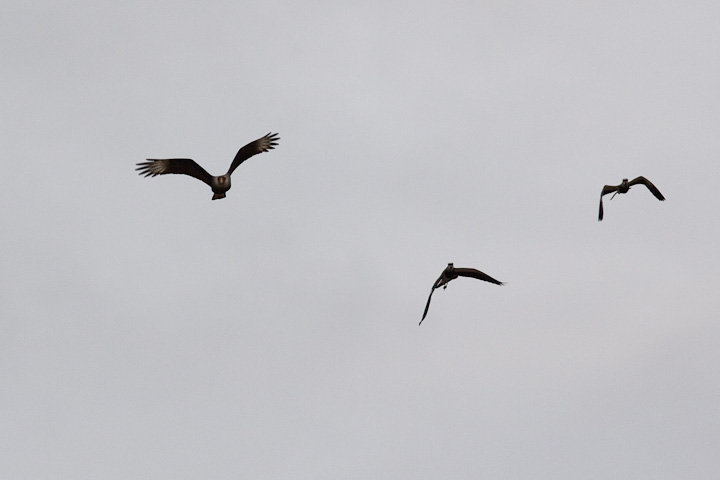 In addition, Northern Crested Caracaras were also present. In one day, we had managed to see 1/2 of the caracara fauna of Guyana! This one is being mobbed by Southern Lapwings. 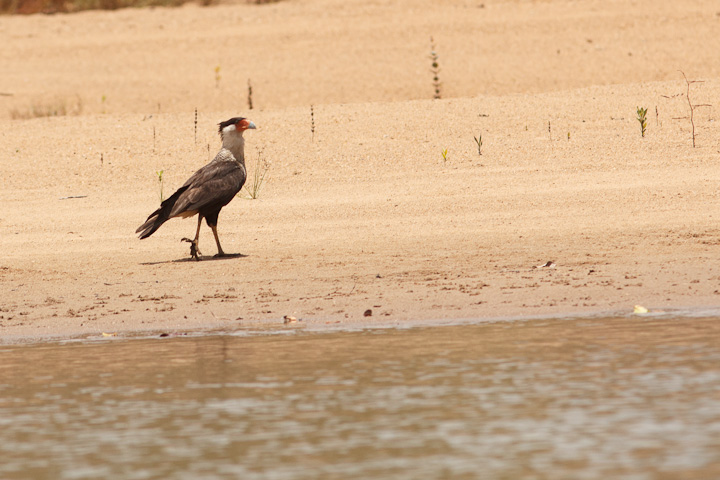 Both the Yellow-headed and Crested Caracaras are much more typical caracaras than Ibycter. They are scavengers and generalist predators, filling an almost equivalent niche that larger corvids do in other parts of the world.