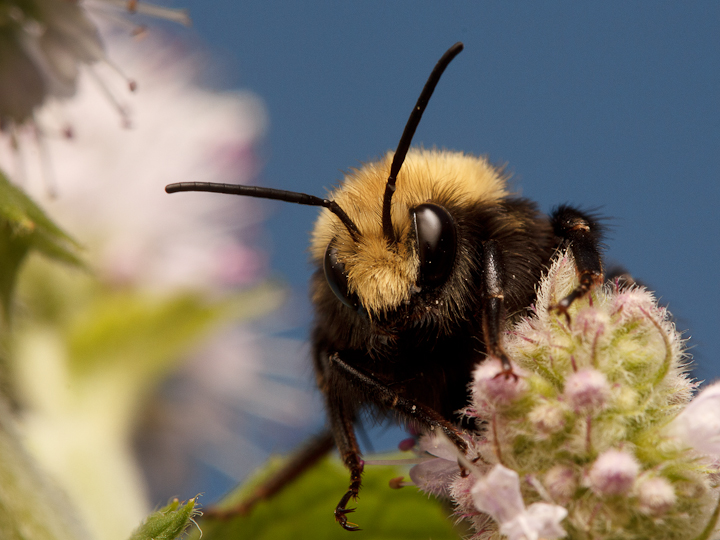 Bombus vosnesenskii, probably the most common bumblebee in Vancouver.

Here are a series of images I shot during the course of a summer day in Vancouver. All are hymenopterans, which, in addition to being tasty, are of course the best insects out there. 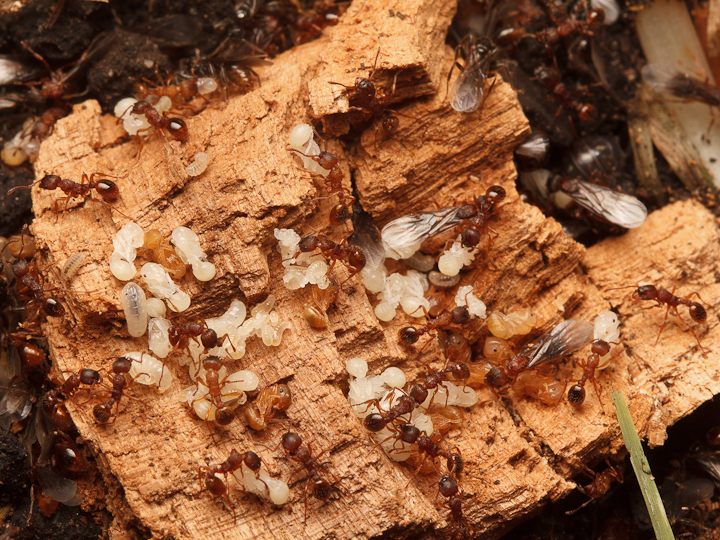 A nest I uncovered of Myrmica specioides, a recent introduction on the West Coast. 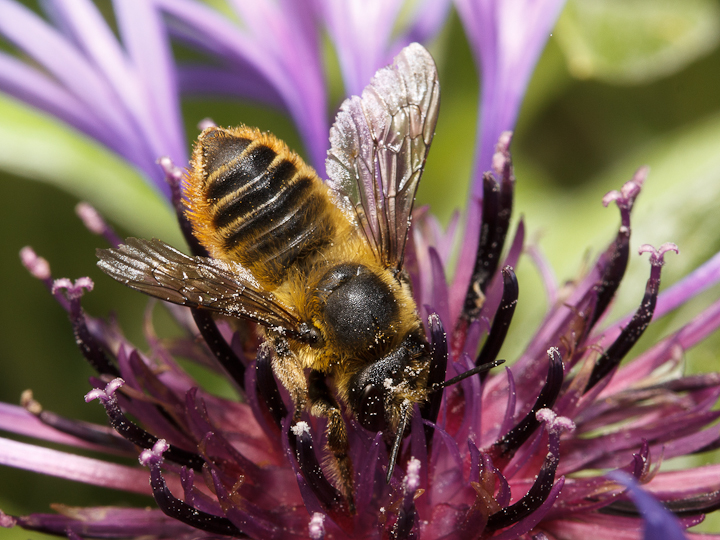 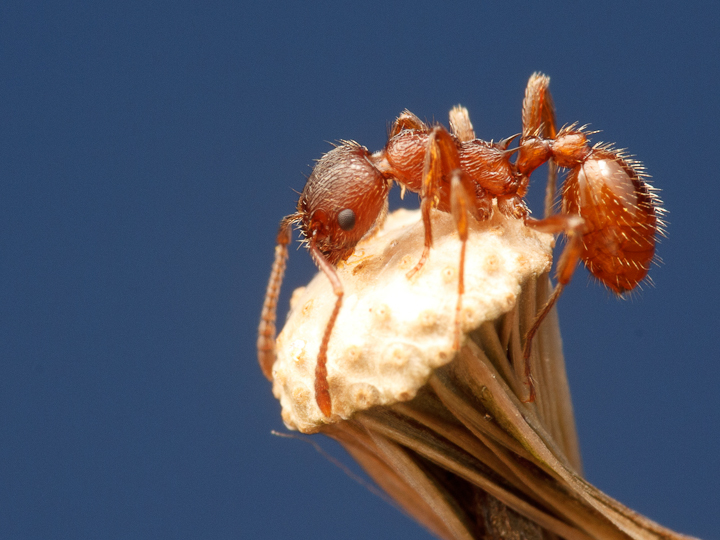 Myrmica rubra against the sky (bribed with a bit of honey). 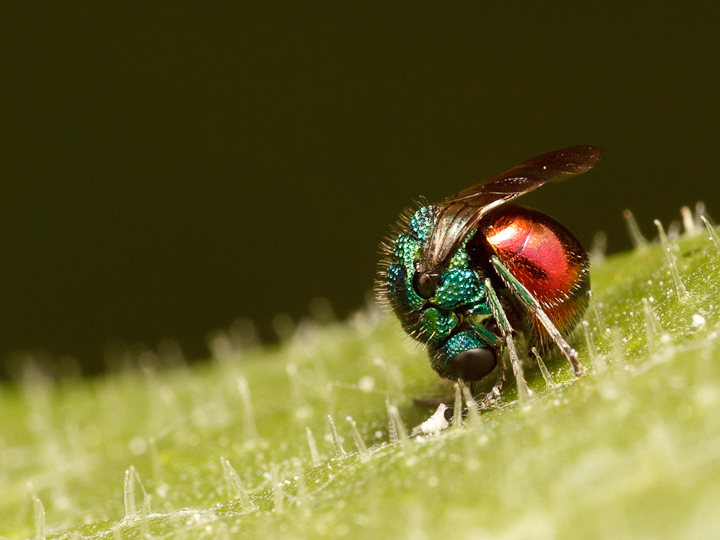 I have always wanted to get a shot of one of these chrysidid beauties. I believe it is Pseudomalus auratus. 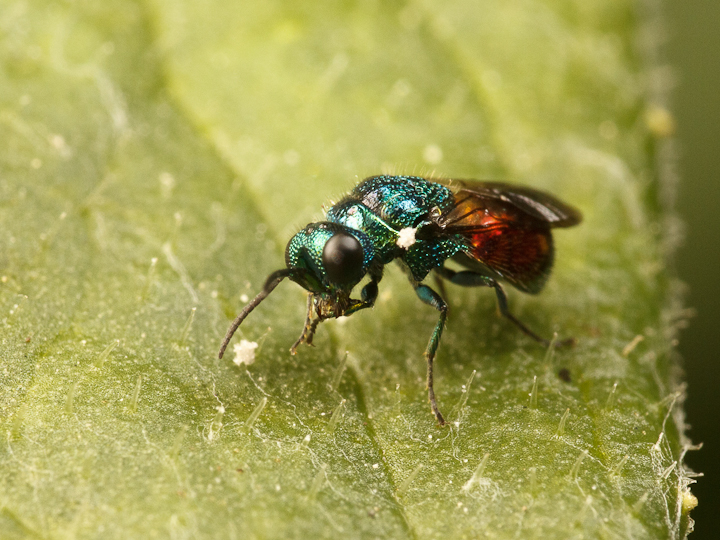 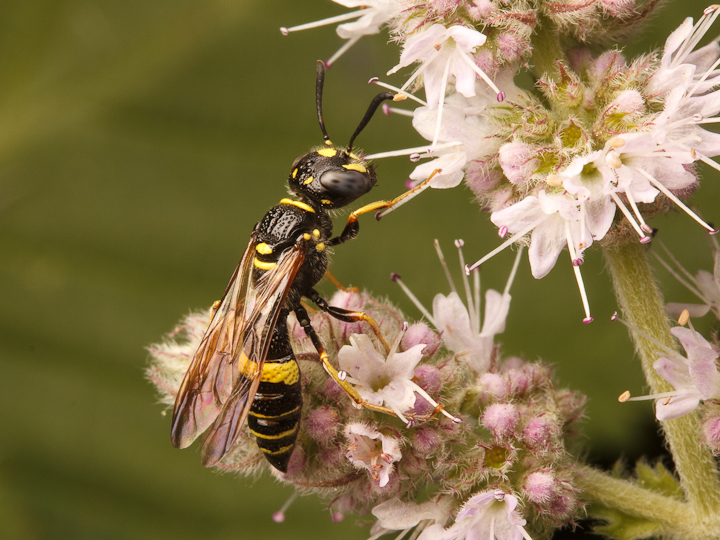 A gorgeous Philanthus beewolf, showing just how much they really do love flowers. 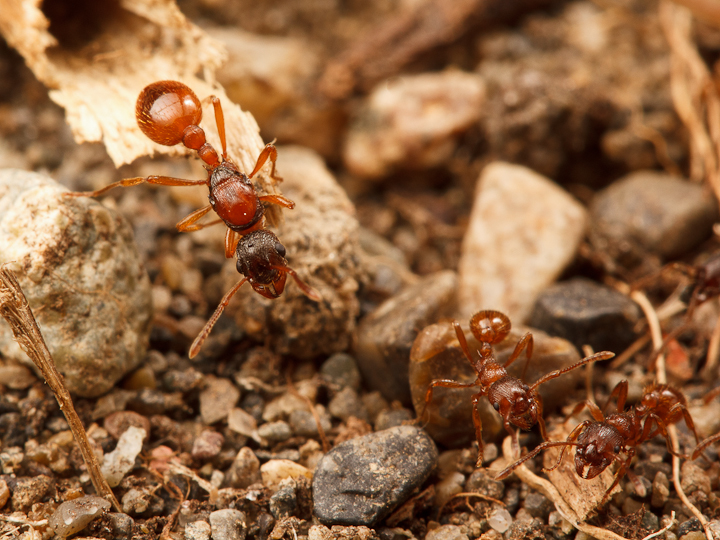 A queen and workers of Myrmica rubra, the European Fire Ant. 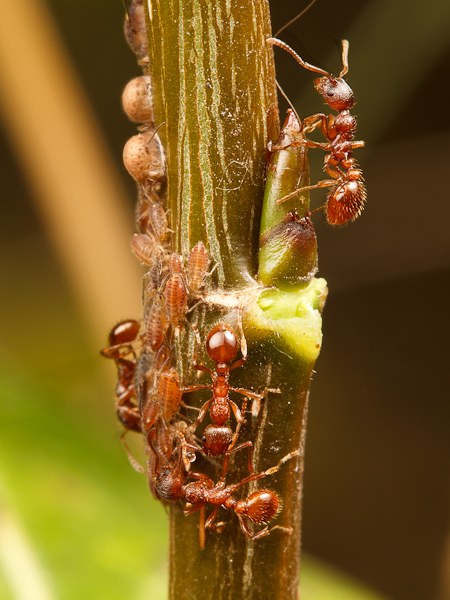 Myrmica rubra tending aphids, a few of which appear to be mummies. 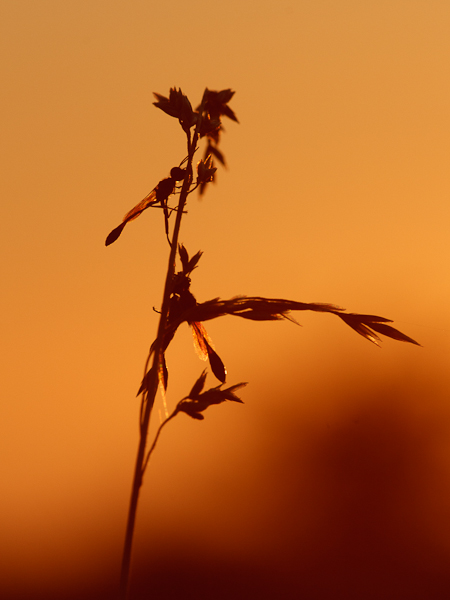 Ammophila wasps at sunset, shot with the 300 mm lens. 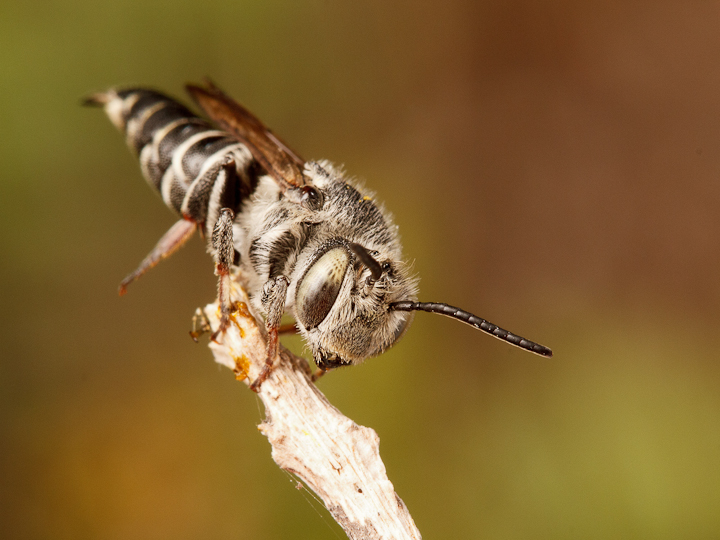 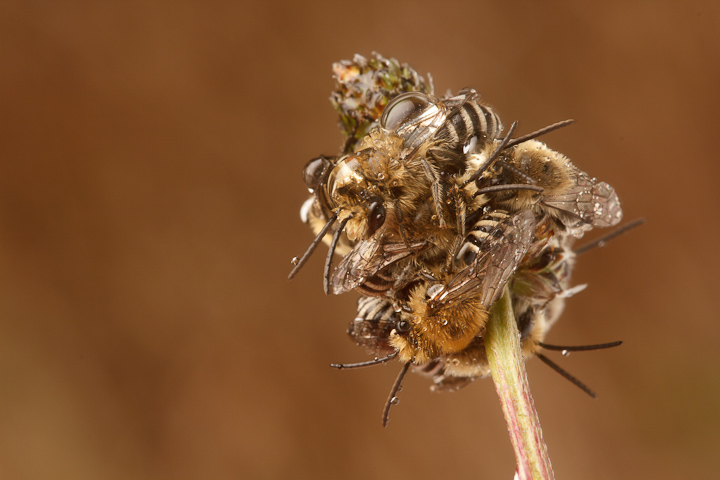 Yesterday was cold and wet at Iona Beach, where I set out for an insect photography walk. The conditions were a bit uncomfortable for me, but it was not raining so much that I could not use my camera. To make up for the wet misery, I found such a lot of cool things that it will take a series of blog posts to cover them all!

This subject came up as I was just leaving the beach, aiming to warm myself up in a hot shower when I glanced down and saw a little cluster of sleeping bees. Looking around on adjacent flowers, I found that there were 5 such clusters! This was too good to pass up, so I buckled down and started shooting despite the cold.

Here are a couple of the other clusters: 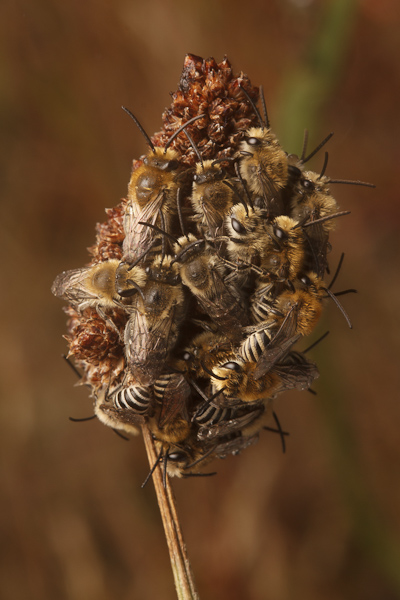 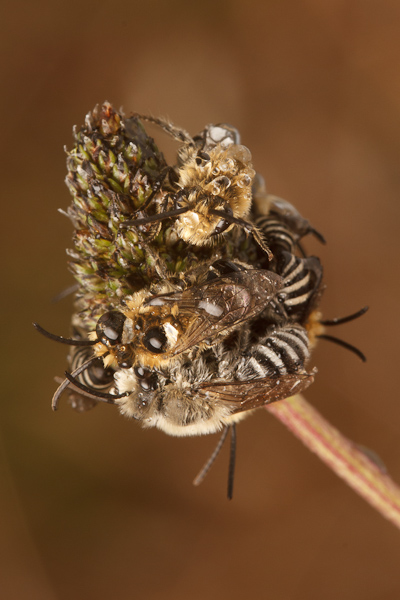 I am no expert on solitary bees, so I would love to know what these are. I initially thought they were Halictus, but I am beginning to wonder about that…Whatever they are, they are all males, as they have very hairy faces (most female solitary bees are all business in the front).

Update! These are apparently Colletes males. Thanks to John Ascher for the ID!

Having  such still subjects allows some experimentation with lighting and background… 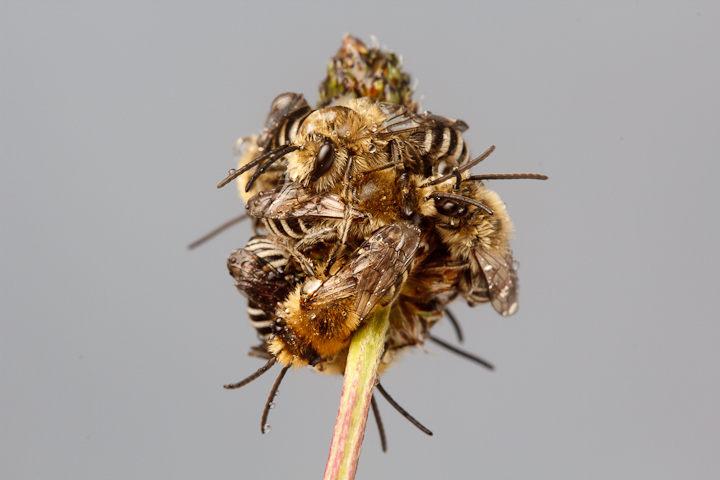 Here they are against the overcast sky. This was a single diffused flash to the upper left of the cluster and a white bounce card held immediately to the right. 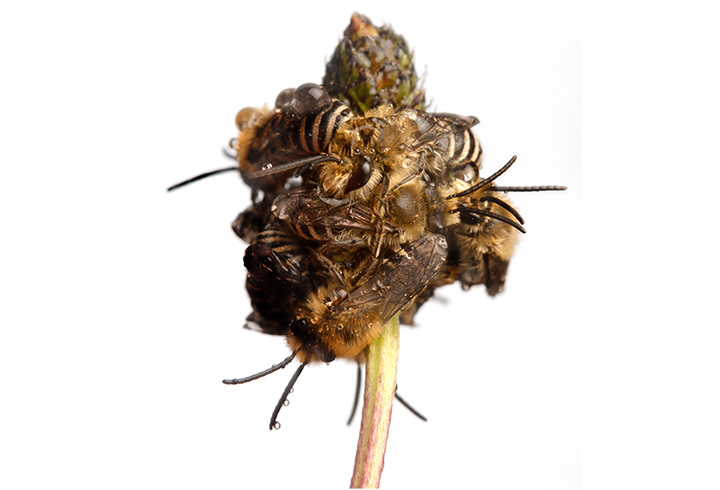 Here I have the diffused light to the upper right, and the bounce card behind (with a flash pointed at it) to blow out the background. In hindsight, maybe I should carry two cards! 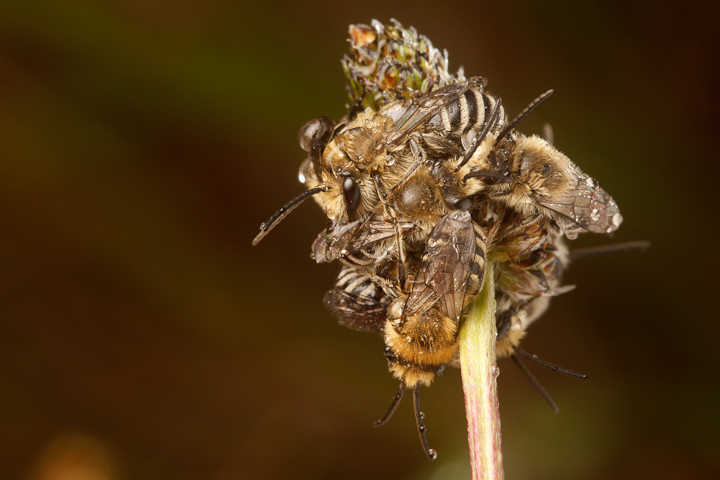 Here I am using a single diffused light to the upper left, a bounce card to the right, and the background lit with the second flash using the Monster Macro Rig. 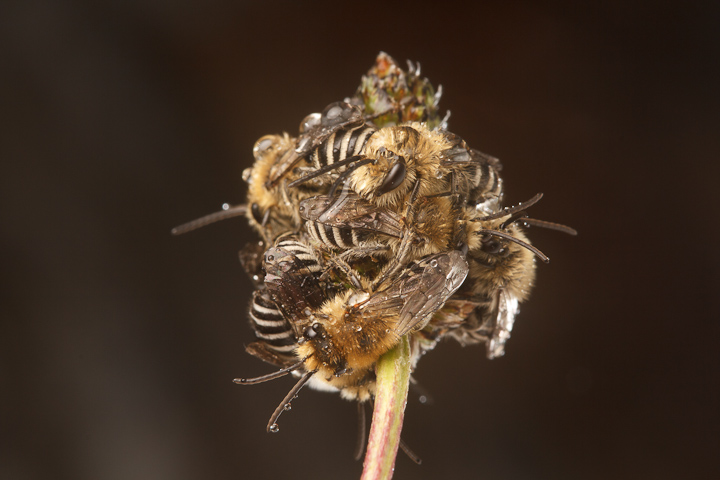 Here the setup is similar to the above, except the background is mostly dark and the second light throws hard light to the right and rear. 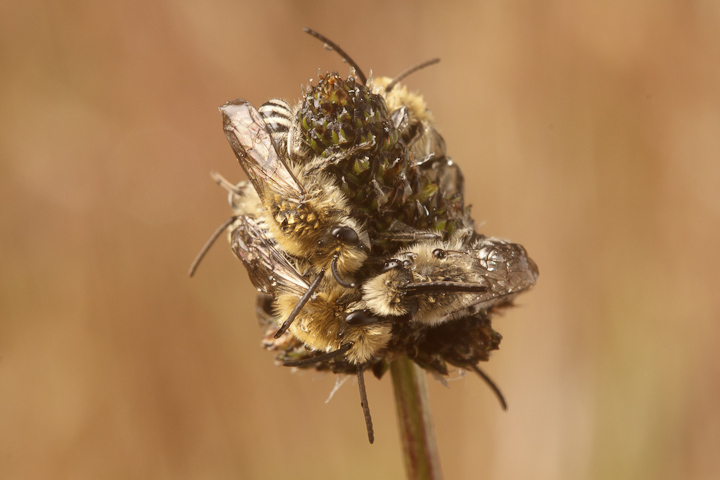 Sleeping bees are awesome…Now I have yet another search image burned into my brain for when I go out in the mornings and evenings!

As I urge you always, go out and find some sleeping Hymenoptera! They are great subjects for photography!

I mentioned that I had a good photography day at Iona Beach…Here is a hint at what comes next: 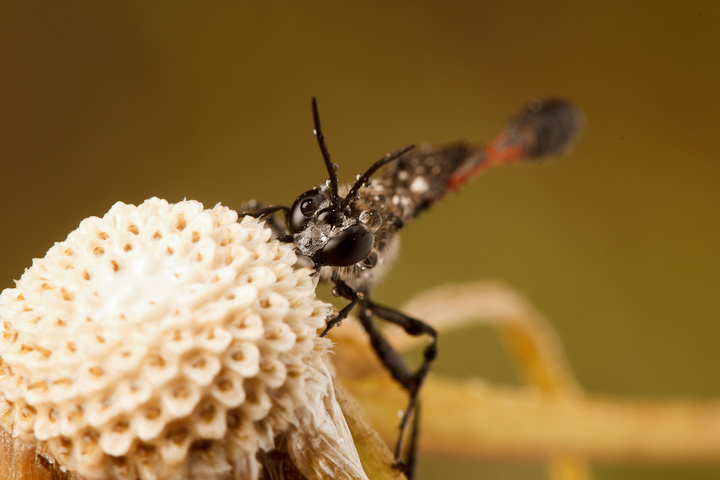 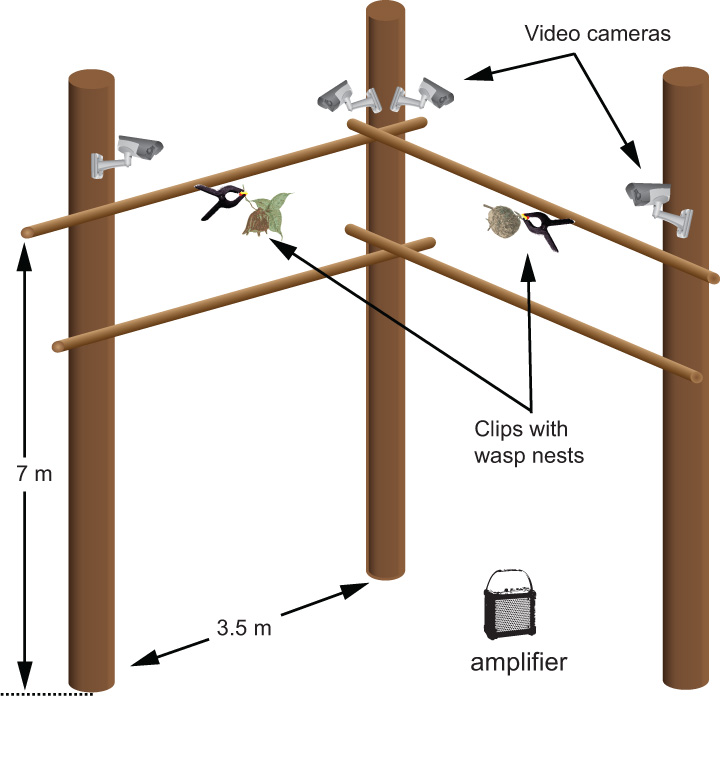 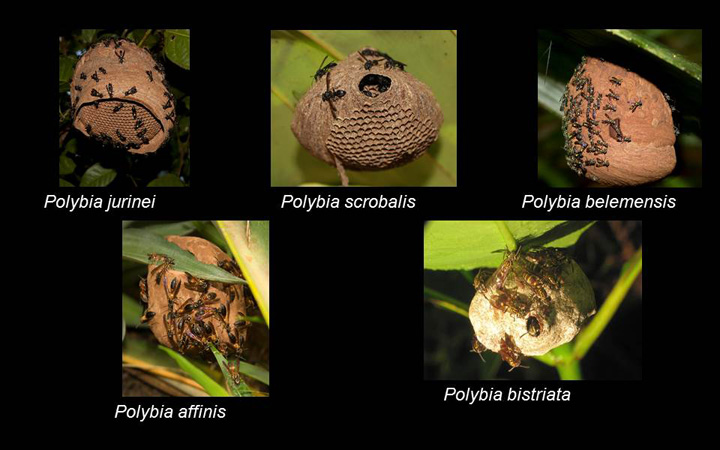 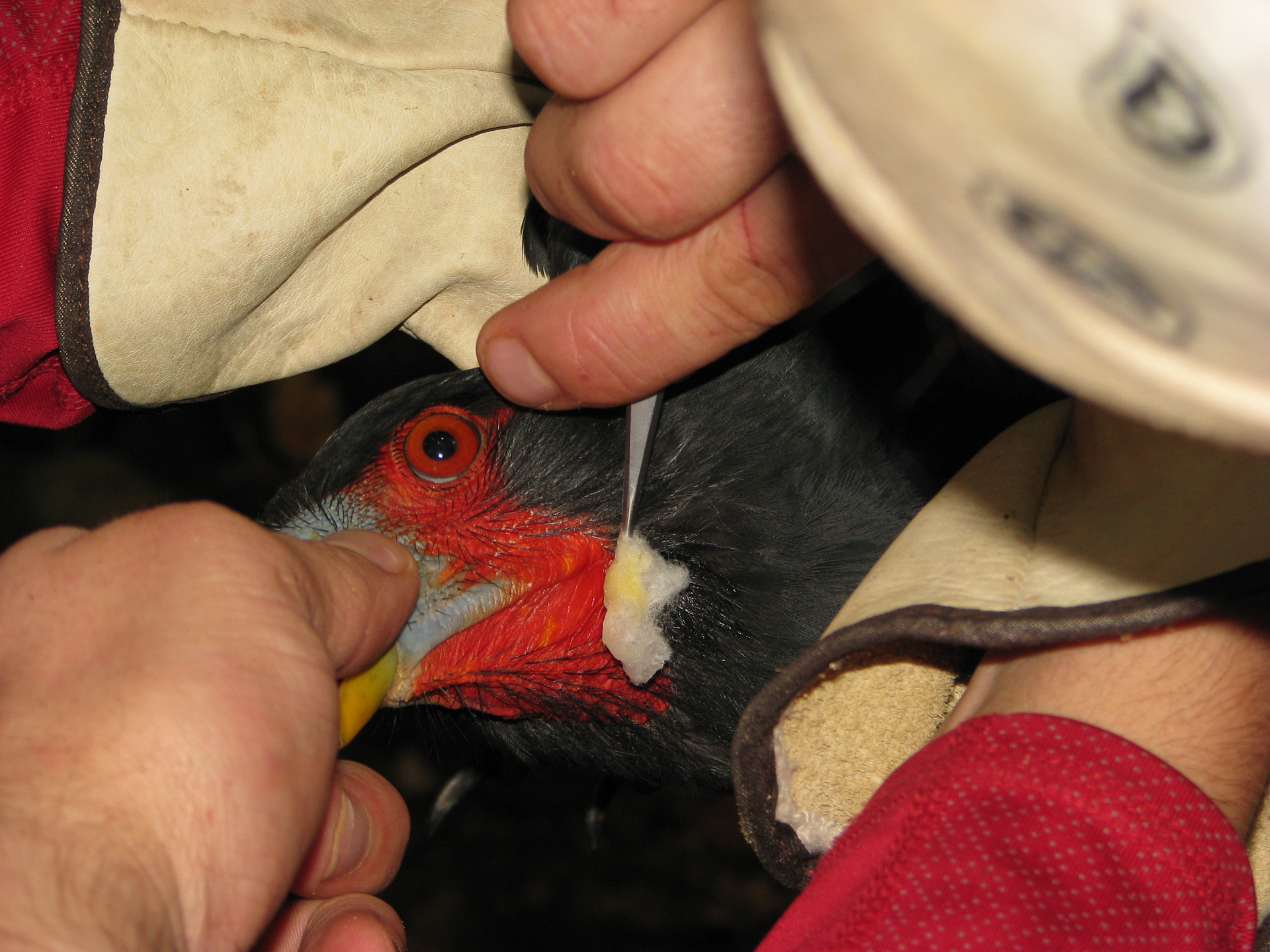 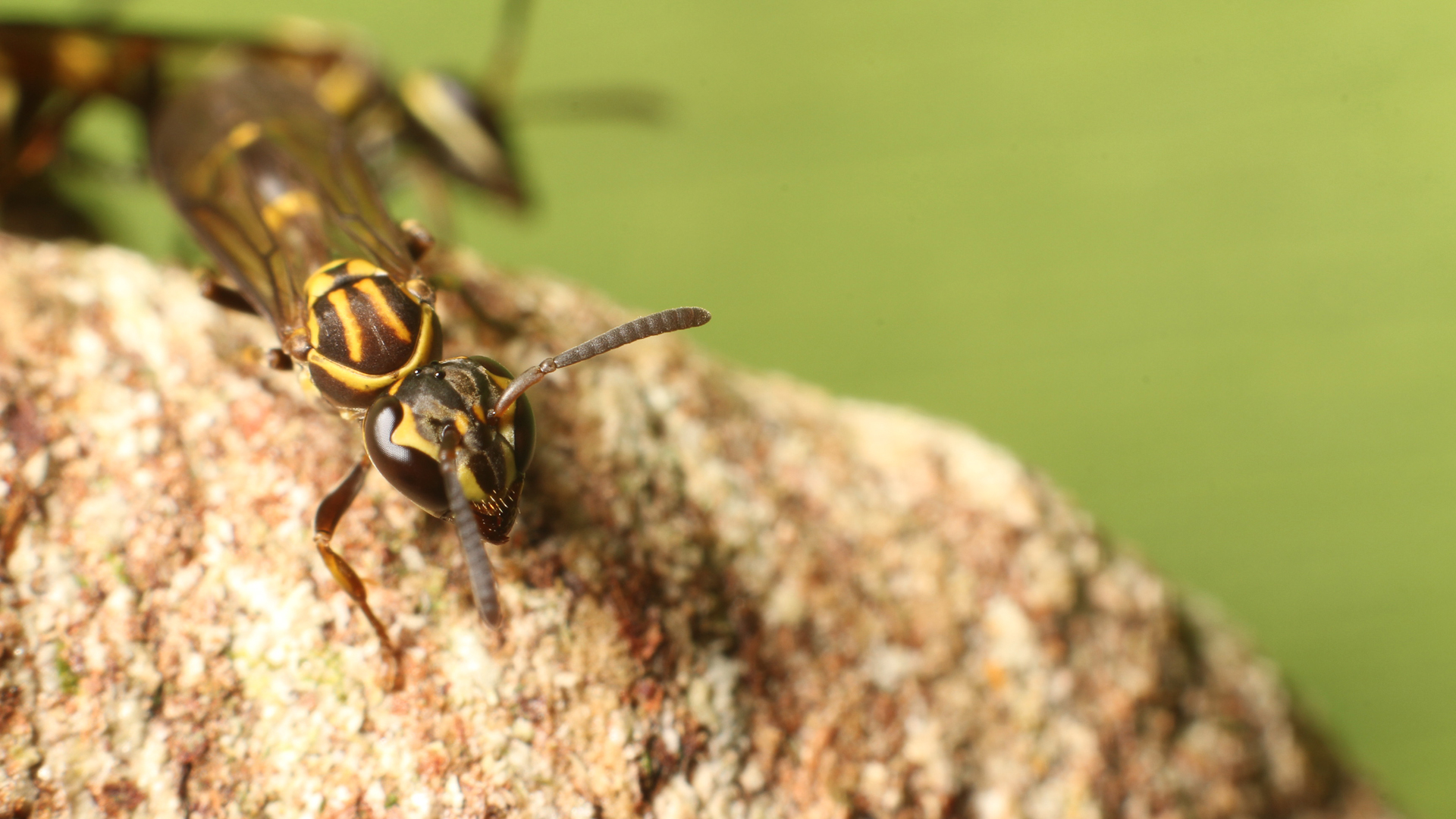 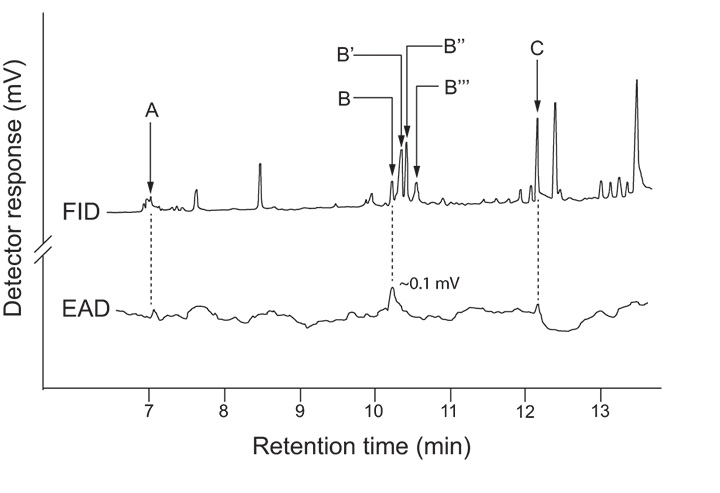 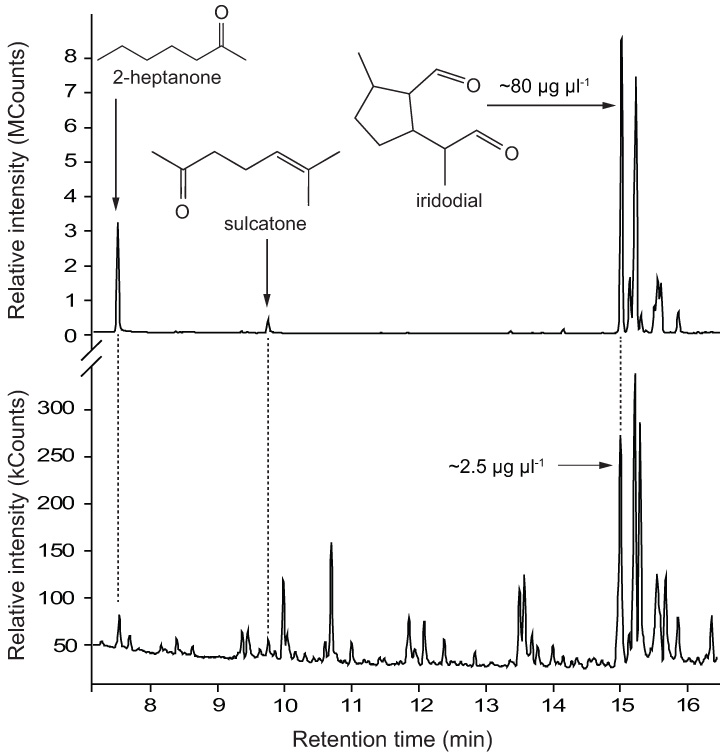 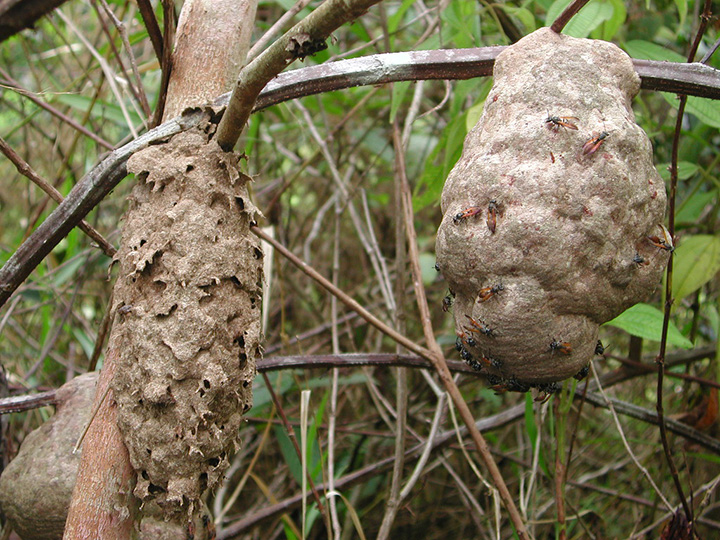 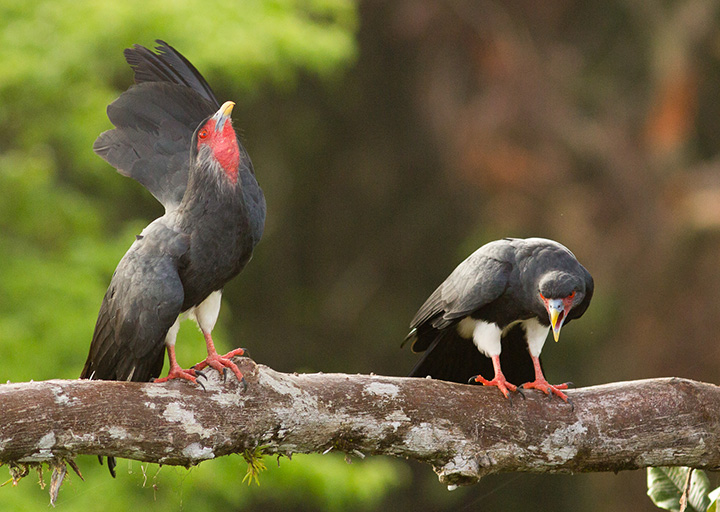