This Weekend Expedition was an important working trip, to collect wild stock for Catherine’s western black widow colony. Catherine studies the sexual communication of these beautiful spiders, and requires wild stock to work on. The purpose of this trip was to collect adult females, as well as egg sacs to give the annual boost that her colony requires. We set out Sunday morning to Island View Beach on the Saanich Peninsula of Vancouver Island to turn over logs and search for a hidden treasure of Latrodectus hesperus.

On the ferry ride over, Catherine begrudgingly shared her breakfast with some gulls.

And became a big star!

Providing some close up views of gulls flying over water!

Catherine explains the double pocket technique: load one pocket with empty vials, and transfer to the other as you collect the spiders.

A rare overwintered male black widow. It is darker than ones reared in the lab.

Black widows were not the only spiders we found of course. Here is a female hobo spider with her egg sac.

A crab spider waits out the rain under a log

We also saw many Dysdera crocata, the Woodlouse Hunter

which are well-endowed with huge fangs, an adaptation to defeat their well-armoured prey.

A grub of what I presume is Polyphylla decemlineta, the 10-lined June beetle

Lunch on the beach in the rain

A very short collection trip comes to an end.

Posing with the booty!

This morning I again took Maggie (the dog) to Mt. Tolmie, a great Garry Oak meadow ecosystem. Of course, I brought along my camera. I was not disappointed with the subjects!

Snakeflies seem to be especially abundant in this park

This is a moth of the genus Adela, but I am unsure what species it is. .

A river otter chows into a large sculpin at East Sooke Park.

This weekend was the  Victoria Day Holiday in Canada, so what better way to spend it than out searching for cool things in and around Victoria? Over the course of the past four days, I traveled on the Saanich Peninsula, out to East Sooke, and around the city to various localities to take pictures of natural things. I also spent some time by the seaside in Oak Bay, shooting intertidal creatures for the Cheapskate Tuesday post to follow. I hope you enjoy the pictures as much as Catherine and I enjoyed taking them!

The Bald Eagles nest at Oak Bay Firehall every year, and are great in the evening light!

Juxtaposition of a rainbow and a robin.

Three bird species in this shot!

My shots of a Camponotus ant colony…Myrmecos here I come!

This was my favourite of the bunch, with the water droplets adding to the interest.

Full of invasive Scitch Broom of course, but that one is never going away….

Ah, East Sooke Park! The access trail is full of slugs, and used to be full of Red-legged frogs as well, but these are getting very rare indeed.

Maggie was our faithful, slightly insanne companion for the hike.

Amphipods mating in a tide pool! Check out those claws!

Epiphytic growth on a fir.

Stonecrop is common in the drier rocky areas.

Unidentified elasmobranch. ID suggestions? The jaws were 16 cm across.

I like this, sea and sky and rock, together with crab.

Looking south across the Strait of Juan de Fuca at Washington State and a US Coast Guard ship.

Catherine takes a break in the spring sun.

Canadian Forces CF18, Note the false canopy, drop tanks and live Sidewinders. My brother tells me it was a coastal patrol flight.

Maggie’s mission is to retrieve stuff, even kelp. It is in her nature!

Many species of birds were feeding on very abundant caterpillars on the Garry Oaks.

Dysdera crocata, the woodlouse hunter! We found a male and female beneath a log.

Check out those woodlouse-killing jaws!

I am back in my real hometown: Victoria, BC, looking after my mom’s dog Maggie while my mom makes a trip to the Rockies. Because I am getting out twice a day with the dog, and sometimes can be persuaded to go out shooting with my brother, there is a good chance I will get some decent photo opportunities. Here is some of what I got yesterday.

Aedes togoi, an introduced mosquito from Japan, was first discovered in Victoria by my entomology professor Richard Ring. This one was hanging out at Cattle Point adjacent to the rock pools where it breeds.

Selatosomus edwardsi, a very pretty Click Beetle. I have found them previously in Victoria.

A moth peeking out to see if it is safe

I don’t always find jumping spiders in the high intertidal zone, but when I do, there are barnacles nearby.

Camas, once a staple food of some Salish people, is still abundant around Victoria, and is quite beautiful this time of year.

Out catching snakes with my brother! Photo by Colin McCann.

This male Anna’s Hummingbird was defending a territory from a blackberry cane.

He really is lovely! Last year I found a nesting female.

A big mess of earwig nymphs!

Another of the hummingbird! I can’t resist!

The other day, when I was out searching for aquatic insects for my new aquarium photography setup, I came to a small pond in the forest just below the school, and could have swore that a Red-legged Frog jumped into the water. I did not want to stir up the pond to much, so I told myself I would come back to confirm.

This morning, after sending my predation manuscript to my coauthors for their input, I went down for a peek. Sure enough, right at the border of the pond, was a beautiful Rana aurora! I took a few photos before letting the frog go on its way. I checked the pond with a net, and found that it was full of eggs and larvae, so this was not the only one! I am excited to see this, as this species has been declining across its range in BC (though they were quite abundant when I was a kid). It is good to know that despite the super pro-development forces at this school, that there still remain parklands that can support these frogs.

This weekend, I will be giving a talk at the Science Rendezvous at SFU (part of a national science festival), so perhaps in the morning I will do some more exploring of the wooded areas near the school.  If anyone is interested in attending, my talk is at 12:30!

Probably the coolest find of the weekend, this Rough-skinned Newt (Taricha granulosa) at Maplewood Park was the first I have seen on the Mainland.

This Weekend Expedition is actually another composite of three trips:

1) to Burnaby Lake with Mike, Catherine, Viorel and Tavi, stalking the elusive goslings

3) finally making it out to Maplewood Park in North Vancouver, accompanied by Adam Blake.

It was an exhausting weekend, with fine weather and good company, so I think I will let the images do most of the talking here!

These are the goslings we were looking for!

Mike shoots from the observation tower.

An Ichneumonid surveys the scene

A Soldier Beetle in the hand

A Mule Deer was unconcerned with our presence

Milbert’s Tortoiseshells on the mudflats

This is known as the McBarge, and actually was a McDonald’s restaurant at Expo ’86. It looks shimmery due to heat and distance.

This Siskin was feeding on dandelion seeds

A Thistle Tortoise Beetle? Guillaume? Anyone? 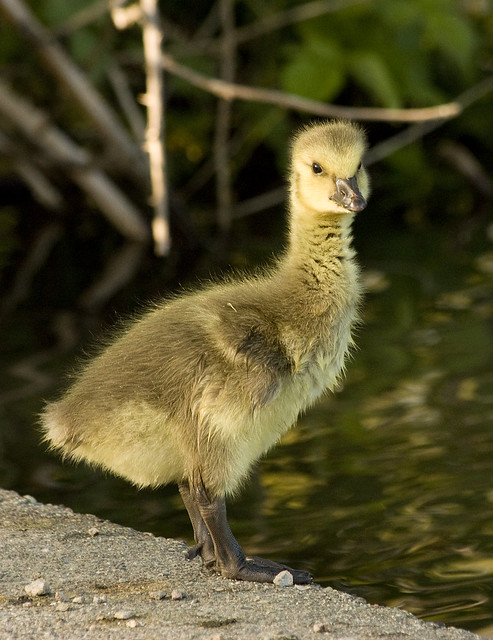 Piper Spit is the main, official entrance to Burnaby Lake Park. It is also a great waterfowl haven, with nest boxes for wood ducks and reed beds. I will go there tomorrow morning with Mike and Catherine to try my luck at shooting excessively cute Canada Goslings! I will of course have the full (heavy) kit with me so any cool insects or spiders are also fair game…

On Sunday I will go with Adam Blake to attempt to redeem last week’s debacle, and actually make it to Maplewood Park.

Last night, a chance photograph of a large Cellar Spider led to a wonderful discovery. Our Pholcus phalangiodes is gravid!

These Longbodied Cellar Spiders are temperate representatives of a largely tropical group of spiders, and are common members of the household fauna. This gravid cellar spider has a large distended abdomen and through the cuticle you can see her ovaries with their developing eggs.

The newly yolk-filled eggs are white, and as they mature, they become dark towards the end of the abdomen. I am expecting that soon we will see this female brooding her package of newly-laid eggs soon, as this one did in the same spot last year.

Within a month or so, these will hatch into gorgeous little translucent Cellar Spiderlings which will remain close to the female until after their first molt.

Despite her advanced gravid state, our Cellar Spider has not lost her long-limbed lean look, which is probably easy if you are a Cellar Spider! For more information about the reproduction of this impressively leggy species, see here.

This Weekend Expedition, we set out to go to North Vancouver’s Maplewood Park. Just a short bus ride across the bridge, right? Well, if is if you manage to catch the bus! Catherine and I arrived at the bus stop just as our bus was pulling out…And it was Sunday, so the next one was in 25 minutes. No problem! Lets just walk to the next bus stop and wait there.

This bus stop was awesome, we had knitting to do and Tobey Maguire (Spiderman!) to keep us company. Except the next bus didn’t stop for us! Apparently, our special bus only stops at the first stop (not that they are labelled or anything. Thanks TransLink!). Rather than wait another 25 minutes, we decided to change plans and head to Hastings Park, a few blocks away. Have a look below to see what we found!

The crows are nesting!

this looks a lot like Brumoides histrio, a type of Ladybird beetle (Coccinellidae). UPDATE: this is actually Brumus quadripustulatus. Thanks V. Belov!

We call them harvestpersons. This one appears to be a harvestchild.

To me this looks like an Anthomyiid. Anyone else have an idea?

I think this syrphid turned out pretty nicely.

The first Damselflies of the season!

I liked how the drop on this lupine magnified the details.

This Ichneumonid was hunting on the Lupines

taken with the Monster Macro Rig…Even though the leaf was moving, the whole exposure is with flash, so no problem.

I wasn’t the only photographer there. Check out this guy with a large format camera!

This Red-winged Blackbird was doing an awesome job defending his territory.

This was my favourite photo of the trip…This heron was unconcerned with me after I had squatted observing for a while. I was apple to approach really close.

Isn’t it gratifying when the lessons you teach your students stick?

Antonia Musso, who was my entomology student in 2010, correctly identified this as a Stonefly (Order Plecoptera) and that they are best preserved in ethanol. She also remembered the most important lesson…Bring the cool insects to me! Adam Blake was quick on the species ID, determining it to be Pternarcys californica (family Pternarcydae). His photo is here.

Antonia and Adam wrangle the Stonefly

By the way, Antonia also has a cool tattoo!